The Lost Civilisation – whose secrets still survive on Britain’s hillsides

Take a drive down any country road that is surrounded by hills and valleys and you will see strange grassy mounts spread sporadically across Britain’s countryside.  These mounts are known to archaeologists as ‘barrows’ and are some of the oldest prehistoric monuments in our history.


If you look at the ‘interpretation’ of these barrows the process becomes very confusing, as Wikipedia will inform you that a Barrow or ‘tumuli’ is “a mound of earth and stones raised over a grave or graves….. and can be found much throughout the world.”
Then it starts to get confusing as “the word tumulus is the Latin for ‘mound or small hill…….”
So is it a grave or a small hill, or a small grave in a shape of a small hill?


It starts to get even more confusing when you look at the varieties of Barrow you can find.  For there are:


Barrows
Bell Barrows
Bowl Barrows
D-Shaped Barrows
Fancy Barrows
Long Barrows
Oval Barrows
Platform Barrows
Pond Barrows
Ring Barrows
Round Barrows
Saucer Barrows
And even Square Barrows!!
I make those 13 different types of barrow according to current archaeology.  Surely, if the archaeologists are correct and these are just grave plots, does it matter what shape they are?


The problem is some if not most Barrows do not have any graves inside them.  The classic case is Silbury Hill at Avebury, the largest prehistoric man-made mount in Europe.  This massive achievement took approximately 18 million man hours to build with antler picks and stone axes.
It was always believed to be a great ‘barrow’ grave to a king, like its Egyptian counterparts.  So on several occasions in the past great tunnels and shafts have been dug to find…… absolutely nothing!
No king, no gold and no lost treasure, just chalk.  So have we got the interpretation of these monuments so wrong and if so, what was there real purpose?
To answer that question we must look at just one variety of barrows – the ‘Long Barrow’.  We have chosen the long barrow because it is the oldest of all the barrows and if we can see why they built these types of barrow we may get a better indication of why the others were build later in history.


The first thing we should note about Long Barrows is that they are unique to Northern Europe, unlike the round barrows.  Archaeologists agree that the long barrow is the oldest monument to exist in our landscape.  This belief originates from the evidence that the structure is very elaborate and includes megalithic stones like the one found at Avebury and other stone circles.  Moreover, they are also aware that they contain bones from many dead people, collected together in the chambers of these burial mounds, rather than individual graves.
Carbon Dating of these bones, as in West Kennett, shows that the bones date back to 3700 BC (about 1,000 years earlier than current build of Stonehenge).  What must be considered is that that date is NOT the construction of the long barrow; it is the date of a set of bones found within.  It is quite possible that bones were cleared out of the open chamber in 3700BC for the bones that we have carbon dated today.
Another interesting feature of these monuments is the size and shape.  We know that these barrows were used for burials as we have found purpose made chambers and bones, so can safely assume the connection to death and the afterlife.  So the shape and size should give us an indication to the beliefs of our ancient ancestors.
Long barrows are long and thing (hence there common name), but more importantly is that they are thinner at one end than the other.

Figure 1. West Kennett Long Barrow - Quite a distinctive and strange shape.
Excavations have shown that there was a ditch that surrounded the barrow, which some archaeologist speculates that was there as a defence feature to keep out animals.  This assumption seem feasible at first glance but, if you want to keep something out you would build a fence as its quicker, cheaper and more effective than a ditch.
The only reason someone would build a ditch is to fill it with water.  We have recently discovered that the landscape in prehistoric times was much more watery than we had first imagined.  The last Ice Age had raised the water levels flooding the environment and turned the landscape to a watery environment or islands and peninsulas.
During the prehistoric period West Kennett was on a peninsula, surrounded by water.  This water would have filled the ditch at West Kennett and the monument takes on a new perspective, for its shape surrounded by water looks like a ‘long boat’. 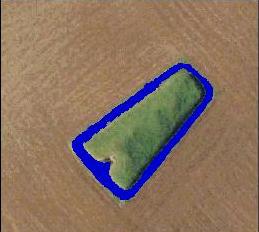 Figure 2 – Long Boat?
The increase water levels would also answer another problem that has been troubling archaeologist over the centuries, how did they get these megalithic rocks weighing over 5 tonnes up to the top of these hills?
At West Kennett, the shoreline would have been just 50 metres away from the long barrow, which made transporting these gigantic stones relatively easy.
So why is a Long Barrow a representation of a boat?
The long barrow represents the boat culture of this ancient society, they lived in boats and not on land as archaeologists currently believe, so when they died they were placed in a boat to go to the afterlife.  Even today in Britain some regions still place money on the deceased eyes to ‘pay the ferryman’ for the voyage to the afterlife.
Consequently, this also gives us a fantastic insight to understand the design of the boats used in this period.  This boat looks more like a barge than a canoe with the back end (the stern) being where they steered the craft (with a rudder), which means they used sails for power not paddles.


Moreover, a sailed boat would have a greater range than a canoe, which is made for just short distances.  The boats front is made at an angle not flat, this represents a design that was made for manoeuvrability, speed and distances clearly indicating the ancestor’s knowledge of engineering - This was not a primitive society!
The other aspect of the Long Barrow is the construction of the end (stern) of the boat.  On West Kennett and other long barrows, giant megaliths were used to highlight the entrance to the chambers.  They are not necessary to the construction, but they are visible a couple of miles in the distance.


Long Barrow’s when first constructed would have been covered not as with grass as today, but with the sub-soil that came from the ditch surrounding it.  In the case of West Kennett it would be bright white chalk.  The most remarkable aspect of Long Barrows is that they have been positioned length ways on, so to be clearly seen on the waterways that existed in the past. 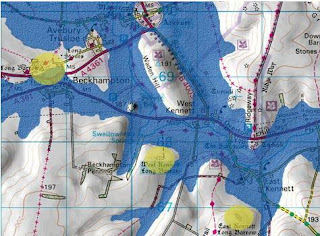 Figure 3 – Showing three Long Barrows facing the ancient waterways
We have found the 8 existing Long Barrows that surround Stonehenge and its sister sites and found that each one points in different directions as measured by a compass, but to the exact contours of the predicted shoreline.
Moreover, not only are these ‘markers’ visible for miles in daylight, but because they are pure white, they can be seen on nights when there is moonshine.  Consequently, we can conclude that this was a 24 hour sailing society.
We can now also understand why they placed large Mesolithic stones in the stern of the Long Barrow, this would indicate the direction the boat should take if there was a split in the estuary.  We have found that the stern stones on all the long barrow boats from Stonehenge to Avebury ALL point in the direction to Stonehenge.
These amazing prehistoric navigational ‘sign posts’ gives us a clear indication that in the Mesolithic Period our ancestors sailed the length and breadth of Britain and did not, as current theories indicate, hunt and gathered on the land.  Their lives were healthy and good, this is reflected in the fact that they lived nearly twice as long as their future descendents in the Iron Age and their tools were sharper and smaller.
What we are witnessing on the hillside of our green and pleasant land are echoes of a great ancient civilisation that brought culture and evolution to our land.  This culture has now been dated by tracing the shorelines around existing prehistoric monuments and carbon dating the mooring posts and harbours of this civilisation.
The results are astonishing, as these sign posts were erected some 10,000 years ago 7500 BC to 8000 BC some 5,000 years before current estimations, making this civilisation the oldest known culture in the world.
Posted by Bob at 6:07:00 pm
Email ThisBlogThis!Share to TwitterShare to FacebookShare to Pinterest