The Ancient Islands of Essex

In my book 'The Stonehenge Enigma' we took an in-depth look at just four sites around Stonehenge that was affected by the flood waters that occurred directly after the last Ice Age.

Today I wish to illustrate that this was not the only area in Britain that suffered from the raised water levels.

One of the mysteries of Prehistory is the lack of Mesolithic or Neolithic sites in Eastern Britain such as Kent, Surrey and Essex in comparison to the large number of sites in Wiltshire, Dorset and Cornwall.  There is no 'migration' answer to this problem, for if the 'traditional' archaeologists are right and we came 'out of Africa' to the 'Middle East' then finally through Europe over the sunken land mass that is now the English Channel - then the number of sites in the South East surely would out number the rest of the country - but that's not the case!!

Archaeologists claim that 'modernisation' in the South East removed all traces of the Stone Circles and Hill forts we find in other regions - but again this line of thinking is plainly wrong for there are still some features in the South East but not in such numbers - so what is the answer?

Quite simply, the area suffered from the worst of the flood after the 'Great Melt' and so  South East Britain become a series of small little islands, very few and far between.

I live in Ongar Essex near Epping Forest.  One of the earliest prehistoric monuments I explored over 30 years ago were the two 'Iron Age' sites that are in the middle of this forest.  Clearly when these sites were created when the landscape was far form the tree lined woods we see today.

Never the less, these two sites have been a complete mystery to archaeologists over the years as they have seem to be placed at random on the landscape, never at the top of a hill nor given the fortification needed to be a defensive site. 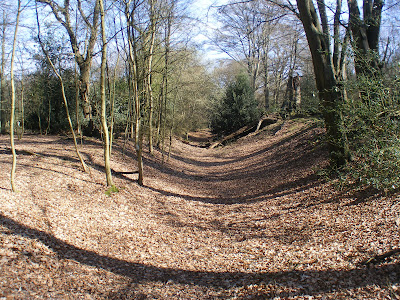 The first site is called 'Ambresbury Banks' it is so called no doubt as it has 2 to 5 metre banks surrounding the site (and I guess the first person to write a report on it was called Amresbury?).

This old sketch shows that its not the traditional circle we see elsewhere more of a Pentagon with 5 sides.  it has large banks surrounding it and so it is registered as an 'Iron Age Fort' by traditional archaeologists.  But clearly any site visit will show you that is wrong! for in the South West corner there is a large hole that never had any ditches!! 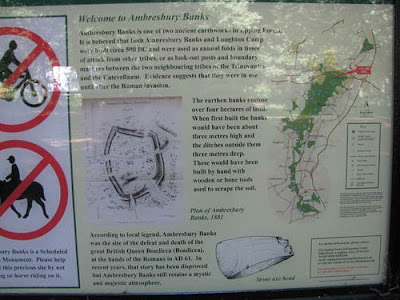 To the south of Amresbury Banks there is a second 'Iron Age Fort' called 'Loughton Camp' this has even more shallower ditched although it is more rounded (oblong) than its sister site.  The problem with this site is that the ditches are even more shallower, to the point of why bother?  Notice also the same opening in the South East corner of the site - the clue is that it is still wet even today!! 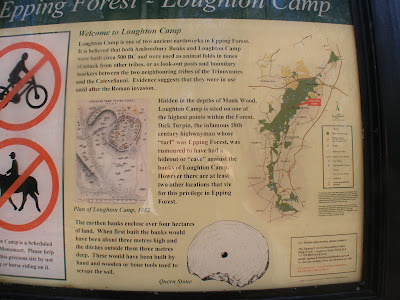 The archaeologists suggest as shown on the sign that this site was built for 'animal folds in time of attack!' - all I can say is that a four hectare site would have taken them some 3 - 5 years to complete 'just for animals' to be kept!  Surely, a wooden fence wood have been more effective and quicker?


So as you see the archaeologists just simple 'don't have a clue' what these sites are for and who built them.

If we now take the area back to the Mesolithic about 5000BC we see a very different picture, for Epping Forest now turns into a ISLAND. 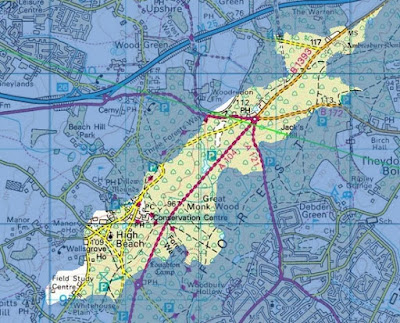 Now look at the localities of the 'Iron Age Forts' - They are on the banks of the Mesolithic shoreline, just like the Case Study sites in my book - Now take another look at the South East section of BOTH sites - can you see the water level at that point?

These are NOT 'Iron Age Forts' in fact the archaeologists are 5,000 years out on their estimations - these are Mesolithic Towns and the inlets you see are were they would have let their boats into the town to moor, just as we do now and if you find that hard to believe - lets take an even closer look at 'Loughton Camp' and see something that confirms our hypothesis. 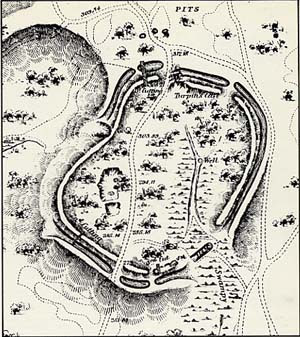 Just outside to the North West is a GIGANTIC HARBOUR capable of taking hundreds of large ships.  The rest of Epping Forests secrets and the other Essex Islands I will keep for my forthcoming book on Mesolithic Essex which is due to be published in the Autumn of 2012.


Posted by Bob at 12:01:00 pm
Email ThisBlogThis!Share to TwitterShare to FacebookShare to Pinterest