This piece of news fell under the radar when I was researching my book 'The Stonehenge Enigma' last year - but will certainly make the second edition next year. 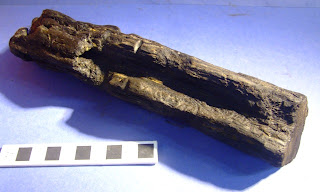 Divers in the solent found pieces of the oldest British boats and which has been dated at 6420 - 6000BC.


This piece of wood shows signs that Mesolithic man had the ability to 'plank' wood down the grain - in this instance the plank was 10m long  - but this length does not make boats - they make ships!!

The basic boat would be made of reed, we have seen that even these basic boats can travel across the Atlantic Ocean like RAII in 1969 - just think what voyages could be made with a wooden ship.

It is ironic that in the month we launch our hypothesis - absolute proof of our maritime ancestors is found in the archives of the BBC.

Follow the link to the Hampshire and Wright Maritime archaeological site.

Posted by Bob at 9:42:00 pm
Email ThisBlogThis!Share to TwitterShare to FacebookShare to Pinterest