Neolithic Pilgrimage from Woodhenge to Stonehenge

During the Summer Solstice I took the opportunity to walk the once sacred path that would have lead from Woodhenge to Stonehenge, used by our ancestors during the Neolithic Period. 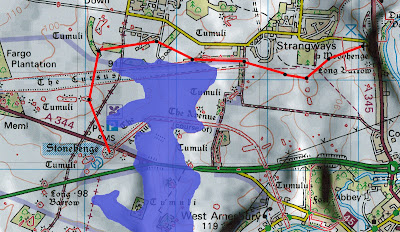 Neolithic Walkway in Red with Scheduled Barrows in Black and the Neolithic shoreline in blue.
As it was probably the first time in 5,000 years since anyone had walked this pilgrimage path on the summer solstice, I thought I should film it for future generations.
Pathway of the Past - Woodhenge to Stonehenge Part I
Pathways of the Past - Woodhenge to Stonehenge Part II
Although I completed the 4km walk with ease, I was unbelievably disappointed at the number of Barrows still remaining, even as they have been identified in the last 100 years and been given Scheduled Monument status that is there to protect form destruction from unscrupulous farmers and property developers who are looking for a 'fast buck'.
Such practices are still continuing today and until someone is thrown into prison our heritage will disappear year by year in front of our eyes.
On our pilgrimage of 8 Barrows only 2 remained!!
But what the walk DID prove that you can walk from Barrow to Barrow - with each barrow being in visible sight of the next.   This is a form of the milestones used by the Roman and Byzantine empires some 2000 years later.
The big question is whether these markers had writing or symbols that could identify where the path lead to and from?  If so was the identifiers either on the side of the Barrows - which would have been a pure white mound about 4 - 6 foot high and 10 - 12 foot in diameter - or did a Standing Stone fit into the centre with the identifier?
Only detailed analysis of remaining undisturbed Barrows will answer that question - so conservation is key!
Posted by Bob at 10:28:00 pm
Email ThisBlogThis!Share to TwitterShare to FacebookShare to Pinterest