STONE ME: The Druids are looking the wrong way at Stonehenge!


At 4:52 on June 21st 2011, the sun will creep up over the horizon then the revered Heel Stone of Stonehenge watched in 'ore' by 10,000 common spectators and Druids alike.  Little do they know that they have turned up prematurely at Britain’s most famous ancient monuments most historical event.

For Stonehenge was ORIGINALLY built NOT to observe the midsummer solstice sunrise as commonly believed, but more significantly the midsummer SUNSET and MOONSET occurring some 17 hours later in the opposite direction (to be accurate more of a 90 degree direction towards the North West). 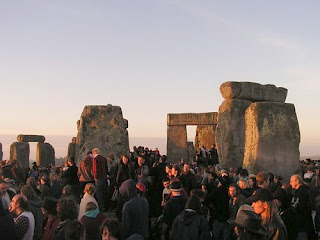 If we look at the common conceptions about the summer solstice at Stonehenge we begin to understand why this ancient monument was NOT constructed to pay homage to the midsummer sunrise. 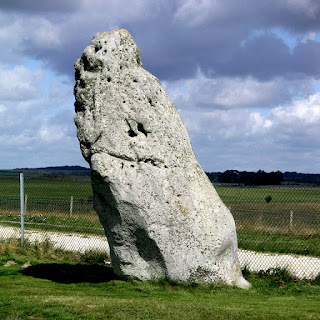 The first thing that strikes you about the Heel stone is that it’s not quite straight.   It does make you wonder why if you go to build a massive and complex structure for the summer solstice, why you would get the pivotal stone in this drama wrong.

To make it fit correctly in an upright position like all the other stones you would need bury it a little bit deeper – one would imagine a relatively easy enough job, especially when you have just buried at least 30 other even larger stones to create the stone circle which Stonehenge’s famous stone circle – but they didn’t.  Instead (to make the stone meet the horizon) they pushed it forward giving it the strange angle we see today.

Some would suggest that this strange angle has some ‘mystical’ meaning or an angle for astronomical alignments - that could be true if it was the only problem with the Heel Stone - but it is not, for it’s NOT IN THE MIDDLE of the Sarsen opening.  If you stand in the middle of the Stonehenge monument and look for the Heel Stone you would expect it to be centre of the opening between the two nearest large Sarsen Stone – but it’s not, it’s in fact to the right. 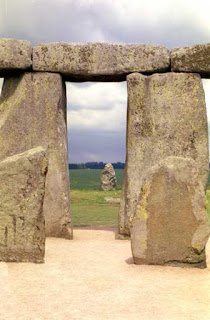 The Heel stone is not centred!

As you see from a photo from the Centre of Stonehenge, the Heel Stone is off centre to the right – when you see pictures from TV and in magazines of the midsummer sunrise they move the camera to adjust the alignment and place the stone in the centre.

So we have a stone that celebrates the Summer solstice sunrise which is off-centre and had to be pushed at an angle to meet the sunrise and horizon.  So is there anything else wrong with the stone? 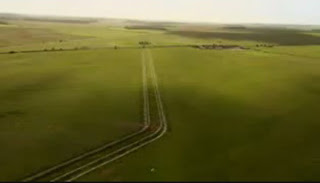 The Avenue is clearly made in two sections: The first Section is straight in a North East Direction and then turns at 90 degrees and wanders off to the river Avon some 1.5km away.  Most archaeologists admit that it was built in two sections and where the second part joined the first archaeologist call this the 'elbow’.
The interesting aspect of the Avenue is it too follows the line of the summer solstice like the Heel Stone and you would imagine that if they both were constructed for the same purpose they would be integral with each other. 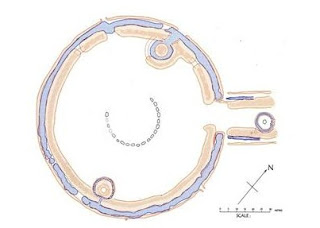 Unfortunately, as the above diagram clearly shows the Heel Stone is to the right of the Avenue as you look down towards the solstice sunrise which clearly shows that it was not made for the purpose was currently believe.

So what was the Heel Stone?

If you look again closely at the illustration above you will see that three stones at Stonehenge have moats, The Northern Station Stone, The Southern Station Stone and The Heels Stone – the fact they had moats surrounding them gives a date of their construction – which was in the first Phase when the monument had a watery moat which feed two of the three standing stone moats, about 8000BC.

The reason for the three standing stone markers is simple – they are direction finders.  If you stand in the centre of the stone circle and look past the Northern Standing Stone it points to one of the nearest ‘trading points’ at the time Avebury.  Similarly, if you look from the centre through the Southern Station Stone it will point you to another trading post Old Sarum and lastly the Heel Stone will point you to Woodhenge and Durrington Walls.

At this time in the past the Sarsen Stones had yet to be transported to the site for construction.  What the site had was a Bluestone horseshoe construction facing the North West.   This is the direction of the midsummer sunset and more importantly the midwinter moonset - the reason why this monument was originally constructed - for that is the direction to the land of the dead and the Bluestones of the Preseli Mountains.

Moreover, another clue to its original meaning can be obtained if we examine the Bluestone structure more closely; for we now see that it’s no really a horseshoe but a crescent moon construction.  Built to symbolise the image of the Moon, for it represented the afterlife to our ancestors, as it still does for us today, as films seem to always show moonlit graveyards in horror movies to represent the dead.

So when Did Stonehenge start worshiping the Sun?

At the end of the Mesolithic Period the Water levels at Stonehenge had dropped by about 10m and the shoreline that once lay to the North West of the site in what is now the Visitors Car Park had disappeared and was only to the East of the site.

So they decided to build an entrance that could take the boats and the Avenue was constructed.  Our ancestors could have made the Avenue in almost any direction, but from the alignment it is clear that it was built to match the Mid-summer sunrise.

This alignment gives us the biggest clue on the construction date of the Avenue and associated Sarsen stones that make up the stone circle and trilithons. For the centre of the Avenue as we have already mentioned is not in line with the current sunrise, which is to the right of the Avenue over the Heel stone.

Astronomers understand that the rising and setting of the sun and moon changes in time due to a strange wobble in the earth’s motion around the sun.  It acts like a gyroscope as it slows down as wobbles around its axis or North Pole in relation to Earth.

We can measure this movement and therefore predict were the sun and moon will rise and set with great procession.  This allows us to date the Avenue as we can measure the exact date the sun would have risen over the centre of the Avenue in the past – 4300BC. 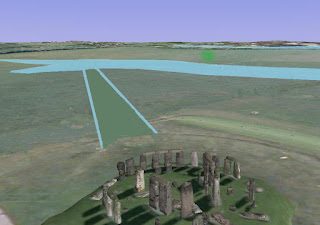 The druids took over the monument in the iron age – but this time it had been disused for nearly 1500 years for we have found the antlers picks used to clean out the ditch once the moat had finally dried up after the Neolithic River had dropped by another 10m which left the Stonehenge monument high and dry as we see it today.

Its at this point the ceremonies we see today at Stonehenge started, they changed the alignment of the Heel Stone to meet the new solstice sunrise but the true meaning and original use of this site had faded by 7,000 years of history.

Posted by Bob at 9:26:00 pm
Email ThisBlogThis!Share to TwitterShare to FacebookShare to Pinterest