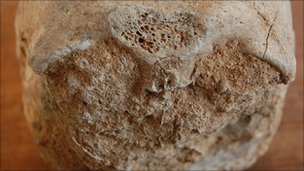 "Somerset was the site of the UK's oldest open-air cemetery, the county council says.
Recent radiocarbon dating of two skulls found at a sand quarry in Greylake nature reserve near Middlezoy in 1928 revealed them to be 10,000 years old.
The council said the find was made under its Lost Islands of Somerset project by a team investigating the archaeology of the Somerset Levels.
Since their discovery, the skulls have been held at Bridgwater's Blake Museum.
The new findings show that by around 8,300 BC, hunter-gatherers were burying their dead on what was once an island amid the Levels.
All the other human remains from this early period in Britain have been found in caves such as Aveline's Hole in Somerset which is the largest Mesolithic burial ground in the UK.
Somerset County Councillor Christine Lawrence, cabinet member for community services said: "Somerset's wonderfully rich heritage plays a big part in attracting visitors. I'm delighted that this project has thrown new light on to these exciting finds."
"Amazing news"
"This was amazing news and was just the result we were hoping for," added Dr Richard Brunning, from Somerset County Council's Heritage Service who is leading the Lost Islands of Somerset Project.
"It shows that a Mesolithic hunter-gatherer group was operating from the island and burying its dead there.
"Such open-air cemeteries are extremely rare in Europe and this is the only one known from the UK."
Flint tools were also found in large numbers on the site in the 1950s suggesting that it was used as a long-term camp site.
The Lost Islands of Somerset Project team will carry out more analysis on the skulls and tools to ascertain how this ancient community lived and died".

Quite interesting until you read between the lines and then some disturbing questions arise:

So what can we truly assume from this evidence?

Well looking at the online archive I can tell you that only the skulls only were found so burial is unlikely and as the original discoverer believed them to be victims of the Sedgmoor battle burials of the 16th century - we can now see why it took 80 years for someone to carbon date the skulls.

As you see when archaeologist get it wrong - they do it big time!

The doctor talks of the skulls being buried on Somerset islands unfortunately I have found the exact site the skulls were found and the profile shows that the quarry is not on an island - nice try!!

What they have found is a boat accident in 8300BC, as you can see they would be islands close to the site and no doubt they were either sailing to or form Glastonbury via Priest Hill which contains a Long Barrow at Collard Hill would you believe!!

Sorry to say just another case of when academics just get it wrong due to them trying to tow the accepted path of scientific nonsense rather than looking at the facts and coming to their own conclusions.  At least it will give my second edition extra material.

This is not the first time that the 'experts' have got it all wrong - the Visitors Car Park Post Holes that we have been discussion recently were found in 1966 and classified as late Neolithic (the same date as Stonehenge), it was only an eagle eyed student (without a PhD or MSc) to realise that the wood found 'pine' did not exist in the late Neolithic Period - it was only then that the sample were sent for carbon testing. Where it would still be sitting now and my hypothesis would have no real evidence.

How many other samples have yet to be discovered??

This is why I question all  academic research, not because they don't understand but they want to keep their jobs and be employed in the future as they have mortgages to pay and children to feed, so they will reflect the 'accepted dates and theories'.

This is institutional self regulation - we see it with the financial services and with the media. It is neither the truth or full disclosure.

Posted by Bob at 11:15:00 pm
Email ThisBlogThis!Share to TwitterShare to FacebookShare to Pinterest