The Somerset Levels - Yet another Paradox?

The Somerset flats are a strange paradox to any rational person studying the area. 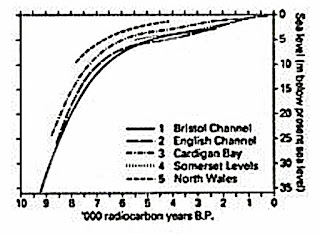 A paper by the Somerset County Council on the Palaeolithic and Mesolithic Period clearly states that;


The Early Mesolithic (as deﬁned for present purposes) covers most of the ﬁrst “epoch”. In the Late Glacial and Early Holocene, the ameliorating Palaeolithic and Mesolithic climate was reﬂected by a rapid rise in sea level of c.1cm per year, with a drop in this rate after c.7000–6500 BP (c.5990–5350 cal BC).


At the time of the Mesolithic, the Somerset Plain was between 5m and 35m above the sea level - so why was it flooded?

Lets see what Wikipedia makes of this paradox?

The Somerset Levels, or the Somerset Levels and Moors as they are less commonly but more correctly known, is a sparsely populated coastal plain and wetland area of central Somerset, South West England, between the Quantock and Mendip Hills. The Levels occupy an area of about 160,000 acres (650 km2), corresponding broadly to the administrative district of Sedgemoor but also including the south-eastern part of the Mendip district. The Somerset Levels are bisected by the Polden Hills; the areas to the south are drained by the River Parrett, and the areas to the North by the rivers Axe and Brue. The Mendip Hills separate the Somerset Levels from the North Somerset Levels. The Somerset Levels consist of marine clay "levels" along the coast, and inland (often peat-based) "moors"; agriculturally, about 70 percent is used as grassland and the rest is arable. Willow and teazel are grown commercially and peat is extracted.
One explanation for the county of Somerset's name is that, in prehistory, because of winter flooding humans restricted their use of the Levels to the summer, leading to a derivation from Sumorsaete, meaning land of the summer people. A Palaeolithic flint tool found in West Sedgemoor is the earliest indication of human presence in the area. The Neolithic people exploited the reedswamps for their natural resources and started to construct wooden trackways, including the world's oldest known timber trackway, the Sweet Track, dating from the 3800s BC. The Levels were the location of the Glastonbury Lake Village as well as two Lake villages at Meare Lake. Several settlements and hill forts were built on the natural "islands" of slightly raised land, including Brent Knoll and Glastonbury. In theRoman period sea salt was extracted and a string of settlements were set up along the Polden Hills.


Winter Flooding - so how do we know that?

But if the Sea level was below the land surface - by at least 5m, how did it flood, even in winter?

The amount of rain needed to flood this area is equivalent to a far eastern monsoon - and if it rained that much in Somerset, it must have rained the same throughout Britain?

The only logical answer is that the rivers feeding this 'delta' were flooded with excess water from the ice age that had raised their water levels by about 30m.  This would allow sufficient water to flood the Somerset Levels before flowing into the Sea some 5m below the land level.

Yet another proof of my hypothesis and how it changed the course of our history.

Posted by Bob at 12:14:00 am
Email ThisBlogThis!Share to TwitterShare to FacebookShare to Pinterest