This is an article that appeared in the Online edition of the BBC website:
A set of human bones at Gloucester museum, always believed to be from the Stone Age, are now thought to be only about 500 years old. 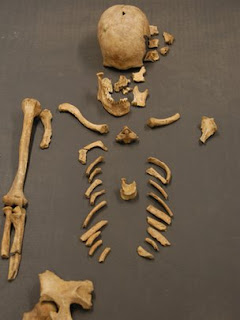 The remains, which have been in storage for more than a century, were labelled "from a long barrow".
Long barrows are ancient Neolithic burial sites from about 6,000 years ago, but radio carbon dating has shown the bones date to between 1523 and 1799.
Gloucester museum's archaeology curator, David Rice, said he was "surprised" by the results.
The box of bones, containing partial remains from at least six individuals, was first officially recorded in a stock take, at what is now Gloucester City Museum and Art Gallery, in the 1950s.
An entry in a ledger from the time reads: "Human bones. One skull, calvarium [upper part of skull] only and part of a lower jaw, together with a large number of bones of several individuals, from a long barrow - site unknown, donor unknown".
'Prehistoric site'
The box contained 262 human bone fragments, ranging from complete arm bones to tiny skull fragments.
Mr Rice said: "The bones had been in storage in a cardboard box. All we had to go on was what was written down in the books."
The museum decided to send the relics away for testing, using modern techniques.
Archaeologist Emily Trapnell from Bournemouth University, who carried out the tests on one of the bones from an adolescent, said: "Initially the bones seemed to fit the description of what you'd expect to find from a Neolithic long barrow.
"The remains were very fragmented, and there was also some animal bone amongst them."
'Definitely a shock'
Ms Trapnell said the intention had been to try to identify the geographical location of the long barrow they came from, by testing soil from the bones and using published literature to try to find a match.
"However after radio carbon dating we found the bones date from between 1523 and 1799 so they are actually modern rather than Neolithic.
"It was definitely a shock," she said.
The analysis also suggested that at least one of the skeletons was from a different site to the other bones, but where, exactly, is still unknown.
Mr Rice said: "Usually we believe everything that's written on a label in a museum, but it seems that something's happened here."
There are now various theories which could explain the date being a lot more recent than expected.
One idea is that whoever dug them up wrongly thought they were digging in a long barrow.
'Smoked big pipes'
"Or it could be the bones are contaminated," added Mr Rice.
"These old curators, they all smoked big pipes and passed things around amongst each other, and it could be that some of their material has rubbed off [which could have produced an error in the radio carbon dating]."
Full article at: http://www.bbc.co.uk/news/uk-england-gloucestershire-15558308
BUT HANG ON JUST A MINUTE.....
Why can't the Long Barrow be ONLY 500 years old?
The only scientific evidence that can be obtained from this site is the carbon dated bones that was dated 1500 - 1700 AD and we know they had the ability to make an authentic reproduction of the ancient 'Long Barrow' so why are we so convinced its 6000 years old not 500?
Are we suggesting that common sense dictates that you can not date a monument by the last piece of carbon dating to be found in the site, because it could have been placed there later by people who appreciated that the monument was built by our ancestors and therefore had some kind of deep reverence?
If that is the case, why do archaeologists still persist in allowing the same OBVIOUS mistakes to be made when other bones are found at sites like West Kennett Long Barrow?
The truth is that you can not rely on the last carbon dating evidence found on a site to date that site, it is a nonsense, yet 90% of archaeology is based on this false conclusion - this 'harms' humanity as it portrays a false sense of history and fails to give us guidance to a better understanding of the origin of the species.
RJL

Posted by Bob at 11:52:00 am
Email ThisBlogThis!Share to TwitterShare to FacebookShare to Pinterest