The timing was important as the 'end of the world as we know it' has historically been predicted on these unique dating events.  This time I was determined to make one of these predictions come true and this trilogy was the solution - as it changes the history, of not only Britain, but Europe and the known  Prehistoric world.

The trilogy looks at the prehistoric findings in archaeology within the book The Stonehenge Enigma.  This books was critical in proving that Stonehenge is 5,000 years older than current estimates.  The proof of this date was found in the Car Park of the Site as in 1966 three post holes were found and carbon dated as 8500BC - the reason for this date was that this was the mooring spot for the boats that carried the Bluestones from the Welsh Preseli Mountains, take completed stage I of the Monument.

But, this was not the only proof of my hypothesis for we also found the navigational aids that allowed the boats to move from port to port during the Mesolithic Period - the Long Barrow.  Later in the Mesolithic as the ground water levels fell these markers were replaced by Round Barrows for our ancestors who by then started to travelled by foot.

My next book in the trilogy (launch date June 2012) The Dawn of the Lost Civilisation traces the civilisation that constructed these monuments on their watery landscape - a land known by the ancient Greeks and Egyptian as Atlantis.  I will show where this civilisation originated through an amazing human mutation that not only made their appearance unique but moreover, changed their DNA and human biology to such an extent that 80% of Europe's population still carries this gene mutation showing us that this civilisation has survived in various forms even today.

The book will not only share the biological secrets of this civilisation, but we will also look at the history of this civilisation's anthropology, to show you; how they looked, what language they spoke and how they morally behaved including the philosophies they handed down to us in the distant past.  As tangible evidence to our hypothesis we will show you a 'map' that still survives within the Stonehenge monument that was constructed as a remembrance to their homeland thousands of years after it was washed away in a place we now call the North Sea.

Looking at the surviving written evidence and mythology we will show how this civilisation lived and the tools and technology that they shared with all mankind that eventually allowed homo sapiens to move from the trees to the moon in a blink of an eye.

Finally, Echoes of Atlantis - will show where these 'homo superiors' went after their homeland finally disappeared and how this peaceful civilisation which mythology still kept alive in our spirit for they lived in a place we often call 'utopia' a society existing in perfect harmony with their surroundings and whose philosophy dictated their final integration into foreign lands and societies - but whose footprints and essence can still be traced today throughout the world. 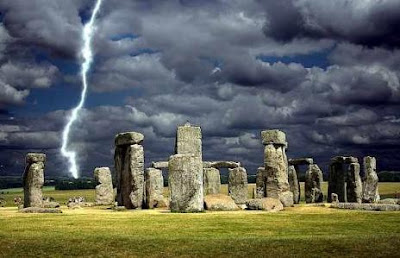 The final part of the trilogy will be launched in June 2014, with the second edition of 'The Stonehenge Enigma' to be published in June 2013.

This will complete the most important book since Darwin's 'Origin of the Species' for it re-writes our history and therefore for the first time we will understand who we are and were we came from.

Posted by Bob at 8:01:00 pm
Email ThisBlogThis!Share to TwitterShare to FacebookShare to Pinterest