AS one of the secrets from my new book has been drawn out in previous posts, I may as well give you a full view of what we have found out about the site and its function in the post 'Atlantean' period of British history.

You must forget the rubbish you have seen from Hollywood and the ‘biased’ writings of the early Celtic and English monks  - nobody likes to be robbed and if you are, don’t expect a good positive write up afterwards!  These people (the remnants of the civilisation known as Atlantis) held a regular court in a place called a ‘thing’, and within this assembly all members of the community would conduct debates and important votes such as electing a king.  This is the first form of ‘democracy’ seen in northern Europe and it is something I believe they exported to Ancient Greece, with other Atlantean philosophies 11,000 years ago,  as the priests told Solon, in Plato's Critias, as part of the Atlantian ‘seeding’ of this new country.

Things
‘Things’ use to be held at places in the British Isles called ‘Moot Hills’ or mons placiti (statue hill). The word ‘moot’ or ‘mote’ is from old English origin, deriving from the verb ‘to meet’ or ‘gather’.  There are still over one hundred Moot, Mote, Mount or Mute hills still visible in the British Isles today.  Others have local names such as Justice, Court or Judgement hill, many are known as Knol, Knock, Knowe or even Law.  But the more interesting ones, give us a clue to how the local peoples enacted 'the law' and moral judgements before the written word and courts of law, were introduced.  Town ‘cryers’ in medieval times would travel from village to village proclaiming a meeting, before then (as at ‘Bonfire Hill’) a ‘beacon’ on top of the hill would be light, no doubt at the end of the working day at twilight, for maximum visibility.  Sometimes linking to other beacons that also would be light when observed.

This hill or mound was historically used as an assembly or meeting place, alternatively, a 'moot hall' could also  be used as an assembly building, traditionally to decide local issues.  These were replaced by churches and town halls in recent times.  People of the town would settle local disputes, with all the members of the town or settlement, amongst other things, proclamations might be read; decisions might be taken and leaders and representatives elected.  Although some moot hills were naturally occurring features others had been created as purpose built mounds for this reason.


Some known ancient moot hill sites were surrounded by water, such as Mugdock, Mound Wood and Court Hill; others probably were in the distant past when the Mesolithic/Neolithic Waters would have been much higher than today, as we have already proven in the first book of this series ‘The Stonehenge Enigma’.  Such inaccessibility would require the use of a boat, this clearly has implications for the Atlantean in the Mesolithic Period, as if you did not have a boat, you did not have a vote or a voice in your society.  The description and use of these meeting places brings the largest man made mount in Europe into mind, Silbury Hill, even bigger than the known ‘thingmote’ in Dublin which was 40 foot high and 240 foot in circumference.

When Atlantis finally sank in 4300BC, the remaining Atlanteans would have needed a central meeting place to continue to conduct the business of government, as they would have done probably on ‘moot hills’ all over Atlantis in the past.  We believe that a representative of the 'local' moot hill would have been sent to a meeting of a greater council (a kind of parliament) that represented this entire civilisation and society.  We have shown that Avebury was created early in the Mesolithic in our book ‘the Stonehenge Enigma’, we also showed that these monuments were ‘updated’ at about 4300BC. The loss of the last part of Atlantis (Doggerland) now correlates exactly with this change in design confirming our original hypothesis.   This forced the ‘capital’ of the kingdom and its parliament to move from Doggerland to Avebury.  It was during this time, the hill at Silbury was started, and became the meeting point for this civilisation, to resolve most issues.  As we have seen beacons on these types of structures were commonplace and some still bare the name such as ‘beacon hill’ in Sussex, England.

In ‘The Stonehenge Enigma’ we showed that Silbury Hill was a beaconed hill and had a fire at the top of its peak to attracted ships to the harbour, that lay below.  I believe that for 'general matters' the people would gather on this hill (like a lower court) to hear speakers and judge matters of importance, but we also feel that the Sanctuary and the known processional stones to Avebury had also a similar function – for this kind of processional walkway of representatives still occurs today in the British parliament, and is lead by the 'speaker of the house' who takes the 'peoples representatives' from one meeting place (the upper house) to another (the lower house) known as the house of commons.

The 98 gigantic stones in the other circle of Avebury (higher court) were added in the post 4300BC sinking of Atlantis, be believe this is the number of Atlantean communities that were made up from local groups – it is probable that each group would be responsible for moving their individual stone, no doubt each one trying to 'out do' the other and hence the size and shape of stone we find at Avebury.  This was the heart of democracy in the 'post Atlantis period' – this suggests that a similar system may have existed in the round concentric rings of the city of Atlantis, prior to the final flood.

The two inner rings at Avebury would have represented the original stone circles 'prior' to it becoming a ‘parliament’ or meeting place for the Atlanteans.  The stones circles represent the Sun and the Moon (30 and 28) and the days within their cycles, but may have probably been used, when voting, to gather the delegates for the count (like the later day 'division' in parliament), to see if the motion or the election of a king was carried or rejected. Or it could be used by the two of the biggest groups of representatives, the 'Noblemen' (kings and royalty) and the 'Clergy' (Druids, Wise men) each with many representatives (block vote?) – this will give us exactly one hundred representative areas. 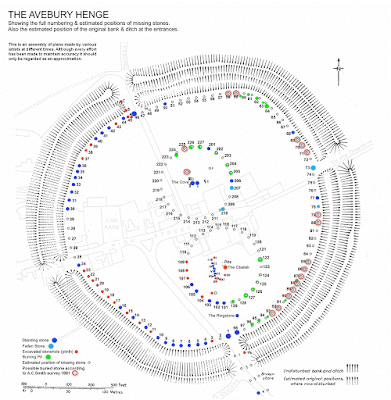 So what exactly did they judge and who were represented?

The concept of the ‘Thing’ is shown in the histories of England, Wales, Ireland, Scotland, Iceland, Demark, Germany, Slavic  and Scandinavian counties.  Made up by free people in Medieval society, and presided over by the ‘lawspeakers’ In Scandinavian countries is called a ‘thingstead’ in Anglo-Saxon a folkmoot or folkmote and in Slavic countries it’s called a ‘Viche’.  In the pre-Christian clan-cultures of Scandinavia the members of a clan were obliged to avenge ‘injuries and death’ by others.  A balanced structure was necessary to reduce tribal feuds and avoid social disorder.  The thing was the assembly of the free people of a country, province or a ‘hundred’.

The Hundreds
A hundred is a geographic division formerly used in England, Wales, Denmark, Germany (Southern Schleswig), Sweden, Finland, Estonia and Norway, which historically was used to divide a larger region into smaller administrative divisions.  Alternative names include wapentake, herred (Danish, Norwegian bokmål), herad (Norwegian nynorsk),  hérað (Icelandic),  härad(Swedish),  Harde  (German) kihlakunta (Finnish) and kihelkond  (Estonian).
The name "hundred" is derived from the number one hundred. It may once have referred to an area liable to provide for a hundred men under arms, or containing roughly a hundred homesteads. It was a traditional Germanic system described as early as AD 98 by Tacitus (the centeni).


Other names of this kind of assembly
In the 7th Century there was an assembly by the name of ‘Witenagemot’ from the old English of ‘meeting of the Wise Men’ and was a political institution of the Anglo-Saxons.  Felix Liebermann, who has studied this version of English ‘assembles’ notes that: “No man can make himself king, but the people has the choice as king whom they please; but after he is consecrated as king, he then has dominion over the people, and they cannot shake his yoke off their necks.”   In the ‘election’ of tradition to having a role in the King, it is often held that the Witenagemots had the power to depose an unpopular king.  However, there are only two occasions where this probably happened, in 757 and 774 with Sigeberht of Wessex and Alhred of Northumbria.

The  ‘Landsgemeinde’ is the oldest form of direct democracy, it is still practised in some level in Switzerland today.  Eligible citizens meet on a certain day in  the open air to decide laws and expenditures by the council.  Everyone can debate a question.  In the past voting was accomplished by those in favour showing their ceremonial sword to prove you was a ‘freeman’.  This unique process may give us a clue to the strange findings of polished stone ‘axes’ and ‘maces’, these artefacts have for many years been ‘unexplained’ as they show no signs of wear or function.  Is it possible that the person elected to the ‘assembly’ is issues with this item which allows them to vote on issues and does this again show why some of these items are made of precious stones such as jade.

A  wapentake is a term derived from the Old Norse vápnatak,  the rough equivalent of an Anglo-Saxon hundred. The word denotes an administrative meeting place, typically a crossroads or a ford in a river. The origin of the word is not known. Folk etymology has it that voting would be denoted or conducted by the show of weapons, or alternately voting was done only by citizens, who were the only ones who could possess weapons, an idea perhaps suggested by references in The Germania  of Tacitus or current practice in the Swiss canton of Appenzell  Innerrhoden.  According to other authorities  weapons were not flourished at a Norse þing and "weapon taking" or vopnatak was the end of an assembly, when one was allowed to take weapons up again, providing another possible origin of the wapentake.

Conclusion
This shows the reason for the 98 stones and two circles at Avebury, it was a meeting point for an organised and cultured civilisation, who would have sailed from the ‘bones’ of Atlantis in Germany, Denmark, Scandinavian countries and the rest of the British Isles to head to Wessex, by ship or boat, following the known trade routes used for thousands of years, around the dogger sandbank that was once Atlantis, probably following the lite beacons on the coast of Britain and down the Thames and then the Kennet to the ‘great fire’ on top of Sibury hill.  For it was here the nation’s leaders would gather together for debate, create laws or to 'crown kings' – for this was NOT  the band of random Mesolithic hunter gathers, archaeologists would have you believe, this was the 'first' advanced and ‘cultured’ civilisation known to humanity.  These where the legendary 'Atlanteans' and it shows that their laws, philosophies and actions still echo in today’s European societies and even those throughout the world.

(by Robert John Langdon)
Posted by Bob at 8:49:00 am
Email ThisBlogThis!Share to TwitterShare to FacebookShare to Pinterest