I need to place this piece of archaeological news on my blog that seemed to miss the radar (News/ TV), as it is either a great hoax or one of the most incredible prehistoric finds ever.


The oldest toy car (right) is as old as 5500 BCE and was found near the North Kurdish town of Qoser (Kızıltepe). The car is worked on stone, has axles of different length and pre-dates Indoeuropeans by a lot.


Previously the oldest known toy cars were from Turkmenistan (Altyndepe) or Mesopotamia, being dated to the fourth millennium BCE.


Other findings in the same site (also worked on stone) are dolls and whistles, the latter still able to produce sounds. These however could be more recent, from the fourth millennium. 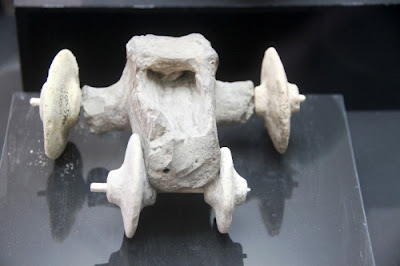 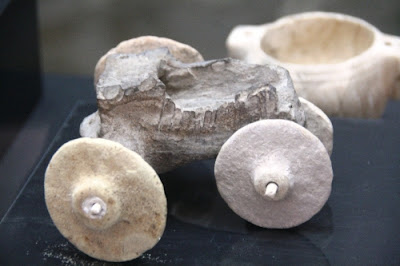 
If this is genuine, then its the first recorded use of the wheel some 2500 earlier than currently believed.  The most interesting aspect of this discovery, is that nearly all toys are based on objects that are used or seen on a day to day basis.  This then adds credibility to my hypothesis that 'The Avenue'  used such devices (carts) to transport the Sarsen stones down the first man-made road (The Avenue) from the ships/boats that brought the stones to Stonehenge.

If these toy models are genuine - then the axles are of the greatest engineering interest as a toy would normally have just a small pole bit to attach the wheels rather than a complete axial.  It shows the technology was available 1200 years before the construction of the Sarsen phase of Stonehenge (4300BC), as for the location, my new book shows that the trading route from the Black Sea to Doggerland was being used over 4000 years before this toy was made and therefore the technology would have been known in both Mesopotamia and Doggerland (Atlantis).


Posted by Bob at 8:48:00 pm
Email ThisBlogThis!Share to TwitterShare to FacebookShare to Pinterest