At last I've been able to get a hardback copy of the book that news reports to 'reschedule' Stonehenge.  As this new schedule is about 5,000 years different to my hypothesis,  clearly someone is wrong!  So I was interested in seeing if it was me or Mike. 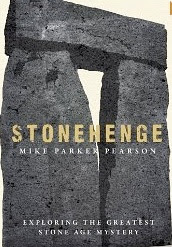 When I first opened the book, I headed straight for the content page to cut the waffle and get the detail, but then the disappointment started!!

This book was the conclusion of four intensive years of archaeological excavation at Stonehenge and should bring new evidence to the discussion table on not only the date of the monument but moreover the nature for its construction.  Alas in the content section they was Chapter 11 'The Druids and Stonehenge'... the druids are iron age people some 3000 after the monument was abandoned - clearly I was in danger of reading a book that could be regurgitation outdated unimportant dogma!

So I made tracks for Chapter 20 'The new Sequence for Stonehenge' - 3000 - 2920 BC "the first features to be constructed were the other bank, ditch inner bank and Aubrey Holes with Bluestones in them" So far so good, I didn't like the dates, but the features were as I perceived them. " Cremation burials accompanied these early feature..."  Hang on!! were did this come from?

Cremations are interesting, but without doubt burials preceded any cremations as the Long Barrows testify.  In fact MPP dedicates a whole page of his 400 page book to them and states that these are the oldest monuments in the British Countryside, numbering over 2,000 sites "which only a fraction has been archaeologically excavated with modern methods" even so without hard evidence they believe they are 500 to 800 years older than Stonehenge. They are also full of bones - not cremations - so is MPP suggesting that the Long Barrow builders are not the Stonehenge people - MPP avoids this key question completely, although it is fundamental to the understanding of why such monuments are first built.

So what is he's evidence for 'Cremations' at the time of Stonehenge's construction?

This came from a 'new' cremation found in the re-excavated Aubrey Hole number 7.  "we trowelled around the edges of the pit to find out whether there were other features - post holes and stakeholes - IN THE VICINITY.  There was a small stake hole on the west side and to our surprise, a complete unexpected cremation burial CLOSE to the western edge of the hole.  We'd seen the dark spread of its SURFACE as soon as we took off the TURF, but had straight way assumed that it was something already investigated - two previous groups of very competent archaeologists had already dug here, after all."

Some earlier reports suggest this cremation was found in Aubrey Hole 7 - IT WAS NOT!!  It was found to the West of the hole in the top soil - This is very interesting as MPP associates it with the construction date of the Aubrey Holes which clearly - IT DOES NOT!

To understand the analysis of this new find we need a better idea of where the cremation was found, the best diagram to date is from Hawley.

Notice the ridge to the west side of Hole number 7 and the extent of top soil to the left of the diagram - MPP did not help us with the location of the hole with diagrams but accidentally his photos give us the exact location.

The photo shows were the hole is in relation to the Aubrey Hole and the relative height.

If we superimpose this onto Hawley's original drawing we can get an exact location.


Hawley did not miss it - for it was not 'in the hole' it was buried NEXT TO THE HOLE!  Now with this new discovery, the wise men of the dig must have asked the question - why there?

Before I answered the question these world famous archaeologists failed to answer, I would like to quote another passage of the book, which should have been a warning to this 'band' of scientists about bad analysis.  It involved another group of archaeologists just a few years ago who jumped to the wrong conclusions based on limited evidence.

"The wet summer of 2008 had at times made our excavations a miserable experience.... Tim and Geoff were gearing up for a big press announcement on the BBC six o'clock news that Stonehenge had finally been dated with certainty... 2300BC.... a carbonised cereal grain from 2008 excavation of a Q hole had provided a date.."

The date for the grain was not 2300BC it was 780AD  - 990AD other dates from charcoal in the same hole was 3370 - 3090BC and a pig bone from the bottom layer was 1480AD - 1620AD MPP concluded that "if we had accepted the new dates then the Sarsen stones were erected somewhere between King Charles II and the Beatles".

So has MPP learnt something from this normal archaeological mess?

No for he has dated the construction of the Aubrey Holes around a secondary hole next to the original.  If you was to dig a hole and leave a memento (human of otherwise) would you not put it in the bottom?  The only 'good' reason that you bury something beside a hole is IF THE HOLE WAS OCCUPIED, then it is second nature to bury things next to it in ASSOCIATION.

Consequently, MPP findings are important as it shows that the Aubrey Holes were in place and still in existence in 3000BC.  Which supports my hypothesis that Stonehenge is much much, older than this rag bag bunch of amateurs known as archaeologists will tell you.

Thanks MPP, don't give up the day job!

Just come across a much better photo of the cremation at the side of the stone hole 'not in it' confirming my views and dating hypothesis for Stonehenge.  How anyone of intelligence can believe that this was not added when the Stone was STILL in the post hole, I will never know! 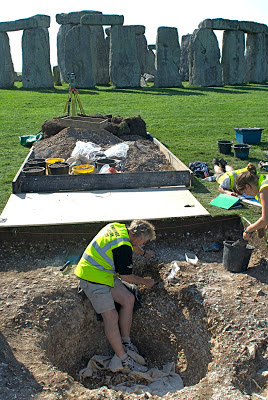 Therefore MPP's 'new dating' of Phase I (Audrey Bluestone erection) 3000BCE - 2875BCE seems totally unlikely, especially when you consider that we have all manner of other carbon dating objects from Stonehenge that have dates that have not been explained to date. 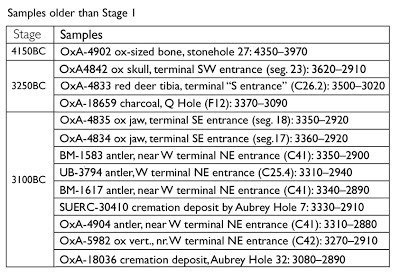 And lets us not forget the Post holes in the Visitor's car park that shows the unloading date of the Bluestones 8500BCE - 7500BCE.

Posted by Bob at 12:32:00 am
Email ThisBlogThis!Share to TwitterShare to FacebookShare to Pinterest