One of my old past times, was to watch Tony Robinson and he's time team explain the archaeology of prehistoric sites armed with the untamed wit of Francis Pryor and he's fellow 'so called' experts - trying to explain prehistoric history, that has a gigantic hole in it!

A recent episode started with an exciting beginning - for me at least.


An inland shoreline, this is not the first time that TT has excavated a plot of land that was once by the shoreline - so I was looking forward to the explanation of why the shoreline looked so different just 1,900 years ago.  Here is a view of the Banchester of Norfolk. 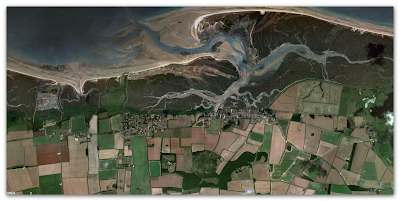 As you can see its currently on the shoreline of the sea and a few waterways still exist that spread to the town and TT's Roman Site to the East of the town.  Here is how Tony saw the river and why the fort was built in this location by the shoreline.


Notice how the Romans placed their forts by the shorelines of rivers and coasts - the simple reason is because you can supply them quicker and more efficiently that by road.   Roman's traded throughout the known world, but history has forgotten that ALL civilisations have traded for the last 10,000 years.

So we now know that the fort was built at the shoreline of the river 2,000 years ago and that the river is now much smaller than today - why? 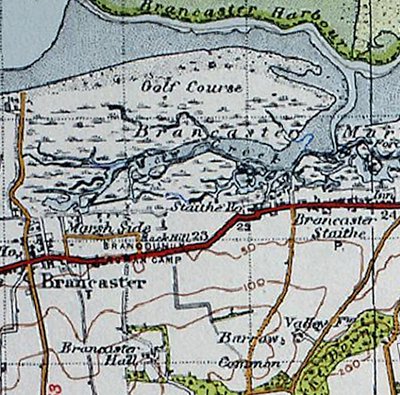 This map shows the original extent of the camp (missed by the TT team!) and the road that led to the shoreline and no doubt mooring place of the Roman settlement - or the beach as they estimated.  Shame they did not look and Geophysics this area (too busty making beer and digging pointless holes in the ground -come back Mick Aston all is forgiven and yes we agree that they have 'dumb down' the series).

So back to the question - why is the shoreline lower today than in the past?  The normal 'excuse' peddled by geologists is that the mud flats or sand dunes move over time.  Sadly for them, so does the sea level - so lets have a look at what height the sea was in the Roman period of Britain.

This graph of the North Sea is typical of today's geological views of the last 2000 years - showing that the sea level in Roman times was at zero or just below 0.2m.  What is more interesting is that we are now 2m above sea level (answers on a post card or the comments section if that makes sense to you!).  So the video of Tony Robinson on his boat, is showing the current sea level - either at 0 or 2m it really does not matter as what all experts conclude is that that tributary was much deeper and wider  in the past than today.

How can it be deeper if this is the highest the sea has been for over 2000 years?

Well it can't, its impossible as the graph proves.  Unless the water was not sea water but fresh groundwater from a river.  I have wrote about this in a previous blog about the same thing in Somerset:

Time Team clearly had come across this paradox about the waterline and their explanation was.... nothing!!  they just ignored the obvious and carried on regardless - more dumbing down??

But that was not the last mystery that they allowed to go without explanation and this was in the final seconds of the program during the conclusion.

An earlier Iron Age (could be much earlier as they found just 3 pieces of pot in a ditch and with such scant evidence most 'intelligent' people would conclude that this is the 'latest' date for this site, NOT the exact date) was just north of the Roman fort closer to the river and about in line to the road (as pointed out previously) which was used as a unloading route for the Romans.  But hang on!!

Why would the 'iron Age' Britain's have an 'enclosure' by the river/port - are they trading by boat??

You see without my hypothesis, the entire history of Britain becomes a paradox of impossibilities, all prehistoric sites are on rivers and trading has been universal since the dawn of mankind and he has done this by boat - not only in this county but throughout the world.  All the Roman's did is carry on the tried and tested formula - they did not invent trading as some archaeologists and historian would have you believe.

What is even more interesting is that the road from the 'Enclosure' moves up hill to a place known as 'Barrow Common' a much older link than the Iron Age (as TT suggested).  Shame they never consulted me on this episode - it would have turn out a lot more interesting and they could have saved the series!!

Can't quite get you head around these facts?

My new years message showed you a Video showing increased water levels in Egypt, allowing them to build the pyramids and trade.  Now take a look at this lecture from the Smithsonian institute who now endorse one of my blogs:

And the next book of the Trilogy 'Dawn of the Lost Civilisation' on how Cro-Magnon man traded throughout the world including America at the time of Stonehenge's construction in the 9th millennium.

Would you believe the same thing has happened in episode 8 of this series on the Thames Villa in Didcot.  This programme was quite ordinary in its findings but the most interesting aspect of the episode was the location of the site.  It took a while and a helicopter ride for 'Stewart' to reliase the site of the Villa was due to the location of the River Thames in Roman times - the alleluia cry was sadly short lived, as although they found the shore lines of the ancient Thames  Steward INCORRECTLY concluded (based on no evidence) that the river had changed course!!


My app which shows the water levels in Roman times, clearly indicates that the river would indeed meet the Villa farmland - if they had this knowledge surely we could have made this episode so much more intresting as we could have looked for the mooring spot on the shoreline.

Or even better archaeology how the rivers course created the surrounding towns and the shoreline paths became the main roads of today.  Unfortunately, due to outdated dogma we was left with a damp squib!!


Posted by Bob at 5:21:00 pm
Email ThisBlogThis!Share to TwitterShare to FacebookShare to Pinterest