GO West from New Scientist 30 March 2013. Edited Extract
We thought we knew the full story of our last great migration, but new evidence means the issue is wide open again
NOT SO long ago there was a simple and seemingly incontrovertible answer to the question of how and when the first settlers made it to the Americas. Some 13,000 years ago, a group of people from Asia walked across a land bridge that connected Siberia to Alaska and headed south.

These people, known to us as the Clovis, were accomplished toolmakers and hunters. Subsisting largely on big game killed with their trademark flint spears, they prospered and spread out across the continent.
For decades this was the received wisdom. So compelling was the Clovis First model that few archaeologists even contemplated an alternative. Some with the temerity to do so complained of a "Clovis police", intent on suppressing dissent.
No longer. Thanks to recent discoveries, the identity of the first Americans is an open question again. Clovis First is not quite dead, but most researchers now accept it is no longer a good fit for the evidence. And so the question must be asked again: when were the Americas first settled, and by whom?
The colonisation of the Americas has long fascinated and frustrated archaeologists. It was the last great human migration, the final leg of our journey out of Africa to lay claim to Earth's habitable continents. Big-game hunters from Asia were always considered likely candidates, but it wasn't until the mid-1960s that this idea was formulated into the Clovis First model, primarily by archaeologist C. Vance Haynes of the University of Arizona in Tucson.
According to Clovis First, around 13,500 years ago, near the end of the last ice age, a brief window of opportunity opened up for humans to finally enter North America. With vast amounts of water locked up in ice caps, sea level was lower than today and Siberia and Alaska were connected by a now-submerged land bridge called Beringia. As the world began to warm, the huge ice sheets that blocked entry into North America began to retreat, parting like the Red Sea to create an ice-free corridor to the east of the Rockies (see map). The Clovis walked right in. 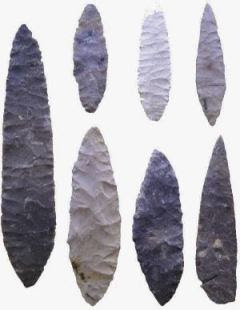 The presence of distinctive stone tools throughout the US and northern Mexico supports the theory, as does the timing of an extinction that wiped out more than 30 groups of large mammals including mammoths, camels and sabre-toothed cats. This coincides neatly with the arrival of Clovis hunters, and could have been their handiwork.
But over the years inconvenient bits of evidence have piled up. In 1997 a delegation of 12 eminent archaeologists visited Monte Verde, a site of human habitation in southern Chile that was first excavated in the 1970s and was claimed to be 14,800 years old. That, of course, contradicted Clovis First. The trip was a pivotal moment: most of the visiting archaeologists changed their minds, and prehistory started to be rewritten......
Support for coastal migration also comes from Waters. He is leading the excavation of Friedkin, a pre-Clovis site in central Texas that he describes as a "game changer". Since digging began in 2006, over 15,000 artefacts have been uncovered – more than found at all other pre-Clovis sites combined – dating from 15,500 to 13,200 years ago. The great majority are offcuts from toolmaking, but there are also choppers, scrapers, hand axes, blades and bladelets.
In Waters's opinion, these could be the precursors of Clovis technology. The blades, bladelets and scrapers are the types of tools they used. "You have the technology that could have become Clovis," he says.
If the dating is right, it adds further credence to a coastal migration. Waters says it is uncertain whether the ice-free corridor was open 15,000 years ago, suggesting the people who made the tools may not have entered via Beringia. "There's any number of ways people could have come," he says – but he favours the coastal route.
Although Waters published his work in Science (vol 331, p 1599), a few archaeologists remain unconvinced the site is that old. Radiocarbon testing is generally the most accurate method for dating artefacts, but can only be used on organic material, which is absent at Friedkin. So Waters used a technology called optically stimulated luminescence.
One of the doubters is Dennis Stanford, a renowned First American expert at the National Museum of Natural History in Washington DC. He also thinks the site's "pre-Clovis" artefacts could in fact be Clovis.
Stanford has another reason for doubting Waters: he believes that he has identified the predecessors of the Clovis. Stanford and Bruce Bradley of the University of Exeter, UK, are leading advocates of the most radical alternative of all: that the first Americans came not from Asia but from Europe.
Specifically they claim that the Clovis are descended from the Solutreans, a Palaeolithic people who flourished on the Iberian Peninsula approximately 24,000 to 17,500 years ago.
In their recent book Across Atlantic Ice, Stanford and Bradley present a scenario in which these people reached the Americas more than 20,000 years ago, travelling by boat along the edge of sea ice that stretched across the Atlantic Ocean from the north coast of Spain to the coast of the Americas.
This is a bold – some say preposterous – hypothesis, although not a brand new one. Over the past century, other archaeologists have proposed that Europeans could have preceded Columbus by millennia, citing a similarity between Clovis and Solutrean tools. Stanford and Bradley have embraced this hypothesis since the mid-1990s.
Stanford turned to Europe after spending about 30 years searching in vain for Clovis-like artefacts in Siberia. In 1996 he went to Solutré in France – the source of the term "Solutrean" – to attend an exhibition comparing Clovis and Solutrean artefacts. He eventually joined forces with Bradley, who was convinced of a Clovis-Solutrean connection.
The two argue that Solutreans were mariners and seal hunters who voyaged along the edge of the ice sheet in search of game. Some time between 23,000 and 19,000 years ago their wanderings led them to America. 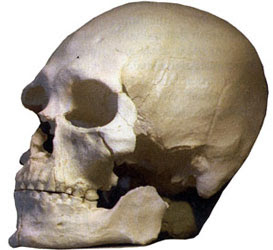 Stanford also believes there were migrations from Asia, especially along the west coast of the Americas, but he maintains that the Solutreans were the precursors of Clovis.
Their hypothesis is buttressed by the recent discovery of two sites along Chesapeake Bay in Maryland, Miles Point and Oyster Cove, with Solutrean-style artifacts. Both sites have been dated at more than 20,000 years old. The pair also note that distinctively Solutrean-like artefacts have been recovered from two other claimed pre-Clovis sites in the eastern US, Meadowcroft Rockshelter in Pennsylvania and Cactus Hill in Virginia.
Stanford says Across Atlantic Ice has made some sceptics more amenable to his ideas. In an editorial in The Journal of Field Archaeology (vol 37, p 83), editors Curtis Runnels and Norman Hammond of Boston University write that Stanford and Bradley "make a plausible case".
The findings are correct although the word cro-magnon were not used as they 'do not exist' in modern (bogus) anthropology - but what I have never told anyone how they navigated to America from Atlantis (Europe) they come up with a strange ice sheet walk across the Atlantic, which like men pulling the Stones over Stonehenge is just 'bonkers'!!
For the 'simple' explanation interested parties will need to wait for my second book 'Dawn of the Lost Civilisation out' in June 2014.
RJL
(by Robert John Langdon)