Current 'thinking' about Mesolthic Britain and Stonehenge can be summed up in this extract from Current Archaeology.  Recently, the BBC's 'Flying archaeologist' also report that men existed in the Stonehenge region 3,000 years 'before they built Stonehenge' ignoring that the first structure at Stonehenge ( I believe that actually dates the structure more accurately) is 5,000 years earlier than current 'thinking' and shows that man must have been in this area two thousand years before the Flying archaeologist claims.
Extract from Current Archaeology
About a mile east of Stonehenge, an impressive promontory rises out of Salisbury Plain to around 95m above sea level. Situated close to the Avenue and Bluestonehenge (CA 237), commanding extensive views over the river Avon, and surrounded at all points of the compass by important prehistoric and historic sites and monuments, this spot might be expected to have held pivotal cultural significance for the plain’s early inhabitants for its location alone. But until our small-scale Open University excavations began in 2005, the Iron Age fortifications cresting the hill had received little archaeological attention. Dubbed ‘Vespasian’s Camp’ by the Elizabethan antiquarian William Camden – despite having no connection to the Roman commander (and later emperor) who subdued Britain’s southwest in the aftermath of the AD 43 Roman conquest (CA 196) – the full archaeological potential of the 2,500-year-old hillfort only started to be appreciated recently. While its substantial ramparts enclosing a 16ha space have earned the site Scheduled Monument status, it was widely assumed that much of the Camp’s archaeology had been destroyed centuries ago.
In the 18th century the Marquess of Queensberry commissioned major landscaping works to the grounds surrounding Amesbury Abbey – later the Antrobus Estate – transforming them into gardens with ornamental walkways, grottoes, and extensive tree planting. It was thought that the hillfort had been included in this project – a belief which, together with the fact that the Camp has been in private hands since the Tudor era, helped to create and reinforce conditions whereby Vespasian’s Camp became an archaeological blind spot in an area world famous for its archaeology.

Springing a surprise
This all changed following research of documents relating to the site and nearby farms. Examining property deeds and estate records revealed that the Camp itself had escaped significant landscaping, and in 2005 our fieldwork started. Following a meeting with landowners Sir Edward and Lady Antrobus, and their Site Custodian Mike Clarke, we whittled six possible targets down to one: a low-lying hollow northeast of the Camp, outside of the scheduled area, known as Blick Mead. Over a long weekend that autumn, a team of 20 recovered over 200 worked flints through test-pitting and surveying, ranging from early Bronze Age-Beaker scrapers to Mesolithic tools. We also made another important discovery:  a water feature, hitherto assumed to have been an 18th-century pond, was neither so simple nor so recent. Geologist Peter Hoare identified it as an ancient spring – the largest of a complex of such in the immediate area – while Reading University’s Head of Environmental Science, Nick Branch, suggests it might have once been part of a seasonal lake. As well as being increasingly regarded as ‘special places’ in the early landscape, springs have potential for excellent preservation conditions. With Blick Mead’s close proximity to such a wealth of archaeological sites and the river Avon, it was clearly a promising target for closer investigation. We have returned to the site every year since, but it was only recently that the spring yielded its most exciting finds. Since 2010 we have started to uncover a very large amount of Mesolithic material in three small trenches around the spring, sealed by a layer of silt. Previously only scattered handfuls of Mesolithic material were known from Salisbury Plain, with the largest assemblage comprising 50 pieces of worked flint, found on King Barrow Ridge about a mile from our site. Our findings have dwarfed this: around 10,000 pieces of struck flint, several kilograms of burnt flint, and over 300 pieces of animal bone. Forming a layer 12cm thick, these finds were described by Professor Tim Darvill during a recent visit to the site as ‘the most important discovery at Stonehenge in many years’.

The most interesting part of this extract is the obvious admission which archaeologist have refused to resolve "we have started to uncover a very large amount of Mesolithic material in three small trenches around the spring, sealed by a layer of silt. "  - if you look at the photo you will notice that the 'silt' is substantial and could only be placed their by a river overflowing.
This is no surprise as it supports my hypothesis that this area was once the shoreline of the River Avon. 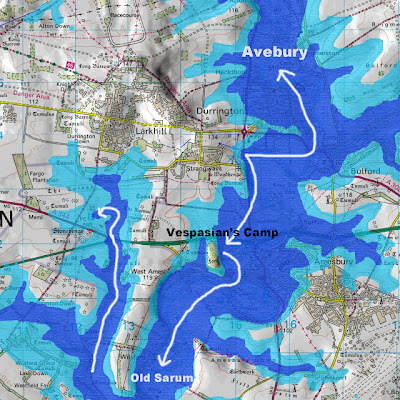 As it can clearly be seen 'Vespasian Camp was an Island in the Mesolithic and a peninsula in the Neolithic on the trade route between 'Old Sarum' (another island) and Avebury.  It would also be used if you traveled to and from Stonehenge to Avebury as it would be a natural TRADING POST AND STOP OFF POINT.
So unless you take you believe your local Sunday market is a place of holy reverence, then all we are looking at is a place of gathering - hence the lack of homes.  Looking forward to more 'institutional thinking' on the next episode of the flying archaeologist.
RJL

(by Robert John Langdon)
Posted by Bob at 10:25:00 am
Email ThisBlogThis!Share to TwitterShare to FacebookShare to Pinterest