The main reason I moved to the South Downs, was to continue my research into the Stonehenge Enigma and find evidence that post glacial waterways existed.  It is not possible to dig into the soil of the South Downs without permission and as it is now designated a 'national park' and therefore such permission is nigh impossible.

Fortunately, the local council is run by the 'green' party and has many 'bizarre' ideas about saving the planet.

So I was not too surprised to find whilst driving alone the coast one day past a 'dean' - the local term for a dry river valley - to find a digger taking off the top soil, allowing me access to see what lays underneath, as the local council attempts to bank up the area to make a 'butterfly sanctuary'!!

If the Geologists are correct and you take off the shallow top soil on a Dean in the South Downs you should find 'wind blown' loess and hill wash from the valley walls.  While my hypothesis states that theses valleys until recent times were rivers and therefore you should find lots of sand.

So IF THE GEOLOGISTS ARE RIGHT under the surface should be SANDY, CLAY and FLINT material mixed with MUD from the water washing the slope.

If I AM RIGHT, you should find ALLUVIUM - which is sand deposit left by the waters shoreline.

Lets have a look at the evidence and see what we found.  This is a map of the area showing the post glacial deposits (according to me!) and an indication of where this site is located. 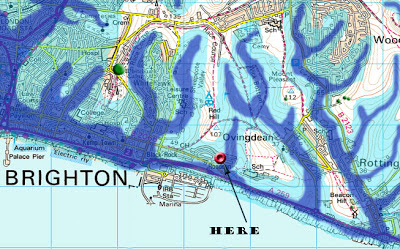 The DARK BLUE is the shoreline of the neolithic water levels (4500 BCE - 2500 BCE) - so lets see what was there SANDY SHORE or EYE WASH? 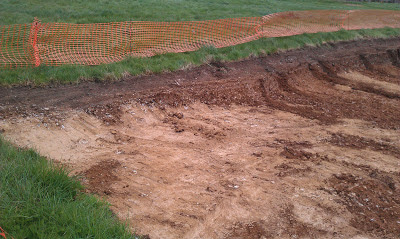 THAT IS DEFINITELY SAND!!! - and the sandy mass follows the post glacial shoreline.

About half a metre or less under the top soil - This so conclusive evidence that once upon a time, in the recent past (hence only 12 - 18 inches of top soil) this was a river as shown on my prehistoric map, making the so called 'dry river valley' rather wet and just in case you don't believe I took the photo in the position indicated on the map - here is a shot with the Dean with the valley below. 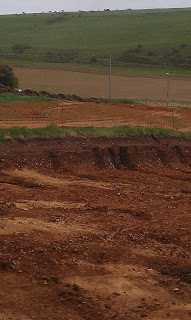 Sadly, this piece of evidence was obtained too late to be added to the Second Edition of the book The Stonehenge Enigma due to be published on 17th June 2013.  But when I get around to write the Third Edition in the future, this will be included as 'Proof of hypothesis Number 41' - and I am sure, by then, there will be many more to be added.

RJL
Posted by Bob at 11:24:00 pm
Email ThisBlogThis!Share to TwitterShare to FacebookShare to Pinterest