I watched with interest the BBC's new series on Atlantis that looks at the adventures of a man called Jason (as in Argonauts fame).  The opening sequence was most encouraging as it showed our hero on a exploration boat in the North Sea and not the Mediterranean as most deluded academics are now claiming. 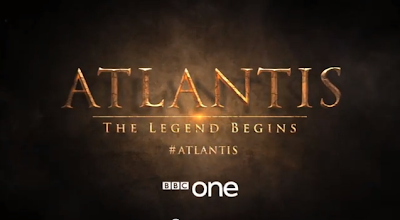 He then takes a submersible (mini submarine) down to what can only be Doggerland at the bottom of the North Sea and finds relics from an ancient civilisation - so far so good... then it goes off into a world where historical accuracy has no meaning.

As the primary expert on the subject - see The Epilogue of my book published on this blog site - I feel that I should offer my services to the producers and director so that they can correct the mistakes of the first series, if a second is commissioned.  For although, the location of Atlantis was correct (or limited filming budget may have used this location by luck?) the historical accuracy of the city and people of Atlantis was plainly wrong!

As an illustration, the city was on a rock face with high walls like a castle.  Plato's description of Atlantis was a City of concentric circles on a flat fertile plain.  The reason the city had concentric circles is because it was a civilisation of mariners, who traded and lived on ships and they moored these boats within these safe harbours as we found in the ancient prehistoric site of Avebury, where you can still see the size and scale of these internal round harbours.  Sadly apart from him swimming to shore the lack of boats in Atlantis is a mystery as nearly everyone in the city seemed to be a trader of tropical fruit without obvious means of transport.


The second major mistake was weaponry, the Greek/Persian looking guards (and why not!) were using 'reflex' bows again with this Greek/Persian influence - but the archaeology of the North Sea and surrounding coast lands show they had 'Long Bows' ( Holmegaard bows in Denmark are dated to the time of Atlantis 9000BC) with micoliths rather than clumsy arrow points.

Lastly (and most importantly) the population of Atlantis was NOT small dark Mediterranean types, Atlanteans were tall, blond and blue eyed - even the three heroes of this adventure are shown to be small Greek like people (politically correct no doubt!) but the description of Hercules is "He was twice as strong and powerful unlike a normal man. His eyes were fremon blue and his hair was light brown which lurked and brushed backwards from his temples. "  which should be no surprise as he was the son of Zeus (yet another blue eyed, blond person) and was from Germania as testified by none other than Tacitus.

He records a special affinity of the Germanic peoples for Hercules. In chapter 3 of his Germania, Tacitus states:

... they say that Hercules, too, once visited them; and when going into battle, they sang of him first of all heroes. They have also those songs of theirs, by the recital of this barditus as they call it, they rouse their courage, while from the note they augur the result of the approaching conflict. For, as their line shouts, they inspire or feel alarm.

And what about our hero Jason well her was an Argonaut and as we know, Jason assembled a great group of heroes, known as the Argonauts after their ship, the Argo. The group of heroes included the Boreads (sons of Boreas, the North Wind) who could fly, Heracles, Philoctetes, Peleus, Telamon, Orpheus, Castor and Pollux, Atalanta, and Euphemus.  All of our hero's were 'sons of Boreas' and as you see in The Epilogue of this blog the Greeks had another word for Atlantis 'Hyperborea' which not only gives us the location of Atlantis but identifies the people that will be become the Norse myths and legends.

RJL
Posted by Bob at 7:19:00 am
Email ThisBlogThis!Share to TwitterShare to FacebookShare to Pinterest