I have just sent off yet another letter to Mike Pitts of the CBA who produces a bi-monthly magazine called 'British Archaeology'.  This is not the first time that I have written to Mike nor no doubt the last, but none to date have ever been published - which I can only attribute to the 'controversial nature' of my findings and hypothesis.  If I am incorrect in my conclusions 'everybody' who has access to a computer can challenge me openly in debate here on this web site which has been done over the past two years with over 1000 comments being posted - one would imagine that the readership of 'British Archaeology' magazine (like me who are charged me £27 a year to read the magazine) would publish each article online so that they can be read and challenged if the facts are wrong- but they don't, so what are they hiding from?

If they are right and us so called  'pseudo scientists' are wrong - surely by an open debate 'the truth will out'?

Or does the archaeological academic 'club' only allow accepted 'propaganda' to be published - can someone please pass me a copy of 1984, I think I'm suffering from 'deja vu'!!

Although it is frustrating as an author not to have your views printed, I suddenly realised this morning after sending the email that I have a far larger audience here on this bog site (with over 100,000 views) than Mikes magazine circulation which is less than 18,000.  I therefore decided to print the letter here - to a greater audience.

I read with great fascination your article in the Sept/Oct issue of the CBA magazine - what is this definitive proof going to be that ended this 260 year old mystery? But sadly it soon became apparent that the article was going to be based on unqualified scientific evidence which gave way to a collection of poor judgements and mindless speculation.

Patch marks are not new to Stonehenge and have been seen many times before, but your article portrayed this common event as a great discovery.  The reality of these marks are not, as you have suggested, a clue to the completion of the stone circle, but an indication that the monument was never designed to be a circle in the first place.  If you look carefully at past 'patch marks' that have been more extensive and pronounced, you will notice a row of 'Z' holes around the present outer ring of sarsen stones - these marks are the exact same size and shape as the marks shown in your article.

Excavation of these 'Z' holes show that they are far too small to have taken the large outer ring sarsen stones you suggest.  But my the major irritation with the article is that we already have physical evidence of the existing standing stone 11 and excavation details of outer stone holes, such as 13, which show quite conclusively that the SW quadrant was left empty of these larger sarsen stones - apart from stones 15 and 16 which are part of the midwinter solstice alignment.  The only redeeming aspect of the article is the quotation you included from Mike Bowden from EH's assessment team who quite rightly points out that there is a case it might be an incomplete circle. 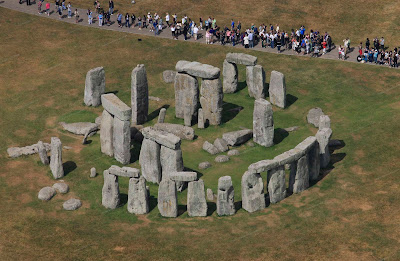 The obvious point which is missing (from the article) is that if it is a monument to the dead, which most archaeologist now believe, it would be dedicated to the moon (hence the Aubrey holes) and therefore NOT a round monument temple (as current perceived) to the sun. Consequently, it was originally constructed as a 'crescent moon' and therefore, all the holes necessary for a complete monument are, and always have been, in place.

RJL
Posted by Bob at 12:05:00 pm
Email ThisBlogThis!Share to TwitterShare to FacebookShare to Pinterest