On a recent visit to Turkey researching more evidence for my next book in the trilogy, Prehistoric Britain - "Dawn of the Lost Civilisation," I came across the ancient City of EPHESUS.


Ephesus (/ˈɛfəsəs/;[1] Greek: Ἔφεσος Ephesos; Turkish: Efes) was an Arzawan (later ancient Greek) city,[2][3] and later a major Roman city, on the coast of Ionia, near present-day Selçuk, İzmir Province, Turkey. It was one of the twelve cities of the Ionian League during the Classical Greek era. In the Roman period Ephesus had a population of 33,600 to 56,000 people, making it the third largest city of Roman Asia Minor after Sardis and Alexandria Troas.[4]
The city was famed for the Temple of Artemis (completed around 550 BC), one of the Seven Wonders of the Ancient World. In 268 AD, the Temple was destroyed or damaged in a raid by the Goths.[5] It may have been rebuilt or repaired but this is uncertain, as its later history is not clear.[6] Emperor Constantine I rebuilt much of the city and erected new public baths. Following the Edict of Thessalonica from emperor Theodosius I, what remained of the temple was destroyed in 401 AD by a mob led by St. John Chrysostom.[7] The town was partially destroyed by an earthquake in 614 AD. The city's importance as a commercial center declined as the harbor was slowly silted up by the Cayster River(Küçük Menderes).
Ephesus was one of the seven churches of Asia that are cited in the Book of Revelation.[8] The Gospel of John may have been written here.[9] The city was the site of several 5th-century Christian Councils, (see Council of Ephesus). It is also the site of a large gladiators' graveyard.

What the guidebooks and tour operators miss in their itineraries is the obvious - how come the harbour which is now dry, be so far away from the sea?
Now there is a throwaway line in Wiki "The city's importance as a commercial center declined as the harbor was slowly silted up by the Cayster River(Küçük Menderes)" and the plans of the city portray this 'silting' as a small natural event. 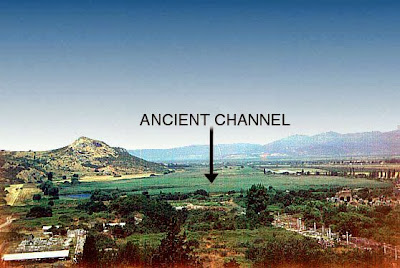 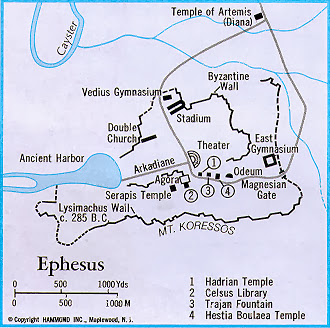 But that is not the reality!

On the lower map you can clearly see how they tried to keep the Ancient city alive by cutting a route to the sea in the Byzantine era (395–1308) - remembering that the sea level was 2m lower at that period. It's the dark-blue cutting below the water highlight to the left of the city.
So what happened to all the water!!
In the Mesolithic Period, the sea level would have been at least 10m lower than today - currently as you can see from the map the harbour is some 7 kilometres (4.5 miles) away from the ancient town, so we are looking at a shoreline about 10 kilometres away when the original Neolithic Harbour was created.  The only logical way that this port (which goes all the way back to the seventh millennium BC) can be a harbour, is if the rivers (again in dark-blue below the highlighted water) were much, much larger in the past.

That the areas bordering Turkey and Asia Minor in the Black and Caspian Sea Areas were directly affected by the last Ice Age as archaeologists have now proven that the rivers swelled and both Seas doubled in size. Consequently, Ephesus (just 250 miles away from the Black Sea) clearly was affected by the same Post Glacial Flooding.

What we are seeing is direct evidence that not only did the inland seas of Europe and Asia Minor become larger than today but also ALL of the rivers that feed and were a source to and from these seas.  Moreover, this changed landscape had a direct influence on the evolution of mankind, as we were able to navigate these enlarged water ways by boat and so travel vast distances to distant lands as you will see in my next book 'Dawn of the Lost Civilisation' out in June.

Consequently, as we can see, that some 1000 miles from the last glaciation, what a dramatic effect it had on the environment during the Mesolithic period, (10,000 BC to 2,500 BC), for even in Asia Minor mankind placed their sites on the shorelines of these prehistoric waterways - So can any intelligent person now even doubt that the same effect and consequence happened in England at Stonehenge, which was just a mere 60 miles away from the ice cap?

RJL
Posted by Bob at 12:17:00 pm
Email ThisBlogThis!Share to TwitterShare to FacebookShare to Pinterest