This article appeared during my research trip to Turkey last month so I missed the publicity - which is a shame as the consequences are enormous but alas yet again the archaeologists get it fundamentally wrong as I will explain at the end.  I have underlined aspects that are plainly incorrect!

The world's oldest boatyard dating back nearly 4,000 years has been uncovered by archaeologists at the site of a new housing estate in Wales.

The site, believed to be the first prehistoric boat building site ever to be discovered, was found when developers came upon the edge of a long-vanished Ice Age lake.

Work on the housing estate in Monmouth, South Wales, was stopped for six months as a team of archaeologists unearthed the remains of the ancient boat building site used by prehistoric man.

Scroll down for video Site: Archaeologists have uncovered a boatyard dating back nearly 4,000 years at the site of a new housing estate in Wales Important discovery: The site, which dates back to 1700 BC, is said to be of 'international importance'. Pictured is an artist's impression of the boatyard Development: The site was found when developers came upon the edge of a long-vanished Ice Age lake

Archaeologist Stephen Clarke said the discovery of the site, which dates back to 1700 BC, was of 'international importance'.

Mr Clarke, 71, said: 'I have been digging for 55 years and I have never seen anything like it.
'No one in the world has ever identified a prehistoric boat building site before.
'They have found fragments of boats but never a boat building site - this is of international importance.'

Excavations at the site have revealed three 100ft-long channels which run parrallel to each other and at right angles to the ancient lake.

The 'dead-straight' metre-wide channels are shaped like the bottom of wooden canoes. They are also cut through a mound of burned earth carbon-dated to the early Bronze Age.


World's oldest boatyard? It looks more like a building site! Work underway: Archaeologists working on the site with the three channels of the boatyard clearly visible Dig: Work on the housing estate was stopped for six months as a team of archaeologists unearthed the remains of the ancient boat building site Boatyard: The three 100ft-long channels run parrallel to each other and at right angles to the ancient lake

Mr Clarke said they showed a twin-hulled boat with an outrigger being dragged into a huge Ice Age lake.
The discovery was made on the newly built Parc Glyndwr housing estate on the edge of the historic market town of Monmouth, South Wales.

Monmouth Archaeological Society moved onto the site soon after the edge of the post-glacial lake was uncovered by unsuspecting builders.

Mr Clarke said: 'It’s a hell of a site - within 60 yards of it we had Stone Age artefacts and six Bronze Age sites. Boat: An artist's impression of the type of boat built in the yard

'The three channels turned out to be 100ft-long and all perfectly parrallel, level and at right angles to the edge of the post-glacial lake. The channels show they built a boat made out of twin canoes with an outrigger.

The oldest boats found by archaeologists are dugout canoes from around 7,000 to 10,000-years-ago.
The Pesse canoe is the oldest ever to be recovered. It was made from the hollowed trunk of a Pinus sylvestris tree.
It is believed to have been built between 8200 and 7600BC.
Elsewhere, a 7,000-year-old reed boat was discovered in Kuwait while they are also known to have been used between 4000 and 3000BC in ancient Egypt and in the Indian Ocean.
Logboats meanwhile also survived in Europe until modern times and are still made in the Tropics.
Planked boats are believed to have developed from extended logboats or rafts.
In Egypt, a method of using mortises and tenons to develop edge-fastening, instead of using stitching or sewing, became the method throughout the Mediterranean and lasted throughout the Greek and Roman times.
Source: ferribyboats.co.uk
'There was no sign of the wooden boat but there was evidence of wood working on the site - with sharp flakes of imported flint found alongside the channels.'

He said the boat was built on what was a huge prehistoric lake which became a home to hunter gatherers - and slowly drained away over thousands of years.

Prehistoric cave drawings in Scandanavia have been discovered depicting outrigger boats like the one built at Monmouth.

And they were still being used in places like Fiji in the 19th century.

A large boat of a similar date and form to the Monmouth remains was recently recovered from a peat bog at Lurgan, Ireland.

Monmouth Archaeological Society have previously won the highest award in their field - the Silver Trowel for the Greatest Initiative in Archaeology.

But after uncovering the prehistoric shipyard the archaeologists had to give it back to housing developers Charles Church.

Mr Clarke said: 'The prehistoric site is now mostly under a flood pond and the parts that aren’t have been built on.
'We have preserved it by recording it to the best of our ability before it was developed on. Unfortunately there just isn’t the money to preserve and protect all these sites.' In use: The boats were still being used in places such as Fiji in the 19th century (pictured)

The research surrounding the prehistoric boat building site is now being published in a book called The Lost Lake.
Mr Clarke added: 'I am hoping other archaeologists will have seen similar channels on other sites and realise what was happening there.

'This is the first site that has been recognised in the world but there must be others out there.' Evidence: Prehistoric cave drawings in Scandanavia have been discovered depicting outrigger boats like the one built at Monmouth. Pictured is an example of similar boats in use in Fiji in the 19th century

Now the obvious mistake is the dating of the so called 'glacial lake' - the last ice age ended about 17,000 BC with all the ice gone by 10,000BC to 12,000BC, we know this because Doggerland started to be eaten away by the sea in this period due to the raised sea levels.  The chances that this was a lake still in 1,700BC (15,000 years after the ice melted) is almost NIL as this map shows it would have naturally drained into the rivers that exist today, if it was a lake.

So what are we seeing here?

This is a map of the same area showing the 'superficial deposits' laid down AFTER the ice age as I have shown in my book 'The Stonehenge Enigma' this is POST GLACIAL FLOODING due to GROUNDWATER levels and effected a much greater area than the boatyard.


Theses raised rivers would created a flooded area of water in the low laying areas as shown here (in yellow and orange), but this is NOT an ice age lake as described as the level is maintained by flowing groundwater from the enlarged rivers feeding the area.  This FUNDAMENTAL mistake is due to archaeologists not understanding the environment after the last ice age during the Mesolithic period and partly in the Neolithic, for these raised water levels decreased gradually over the last 10,000 as they are still doing TODAY and eventually the River Minnow will disappear from the map.

So how accurate are the dates?

As archaeologists are ignorant of the hydrology of this area all they have to rely on is carbon dating.  They found a fire in one of the boat pits " cut through a mound of burned earth carbon dated to the early Bronze Age" Which clearly was used as a natural grassy dip in the ground and natural shelter for a fire at a LATER DATE after the boatyard was disused - for they have found similar dates at a camp over 60m away and probably not associated nearby the boatyard with other Bronze Age date.  For on site they have found Mesolithic tools.


Sadly, this confusion is commonplace with current archaeologist as we can see on this site just last year, for they (not believing in boats) first publicised there find as a 'Long House' but later they changed their mind as reported; "Earlier this year archaeologists working at a dig at the Parc Glyndwr housing development said they may have found the remains of a "longhouse" dating back to at least the Bronze Age and possibly as far back as the New Stone Age."

The only 'fact' is that this channel was man-made and cut into the riverbank of a Post Glacial River, which existed probably until about five thousand years ago - so we are looking at a date of about 3000BC - 8000BC and we can be quite sure of these dates as this is NOT the only ship 'slipway' to be found in Britain - there are THOUSANDS yes thousands of these throughout the country!!

Again, archaeologists are at a loss for these constructions which some still carry their accent name of 'Dykes' (something to do with water I would speculate?) or on OS maps as 'earthworks' - what archaeologists are unaware of is that EVERYONE of these slipways/canals feed directly into the same Post Glacial Rivers as we have illustrated here.

But what is even more unbelievable!
Is the quite remarkable fact it is a catamaran - as I predicted on this blog site in 2011 and my book in 2010. 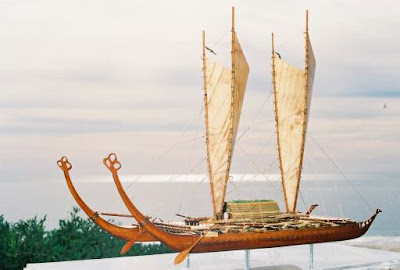 And these are not made for rivers but sea travel - created by the megalithic builders to travel the known world as you will see in my next book 'Dawn of the Lost Civilisation' out in June 2014.


Prehistoric Britain is a trilogy of books that include - The Stonehenge Enigma, Dawn of the lost Civilisation and Echoes of Atlantis. The Second edition of TSE includes the locates the lost world of Plato's Atlantis. The Stonehenge Enigma, which is the first volume of Robert John Langdon's epic trilogy Prehistoric Britain. Reveals (through Radiocarbon Dating) for the first time that Stonehenge is 5,000 years older than currently believed and details of a six thousand year old map that lay partially buried in the ground that depicts the legendary island of Atlantis. The Slaughter Stone at Stonehenge is well known to archaeologists throughout the world. But what these experts have failed to appreciate is that this stone was deliberately place in the ground by the builders of Stonehenge to represent a world that was flooded some 6,000 years ago by the rising sea waters. The book concludes that the entire Stonehenge monument was built in reverence to the lost souls of Atlantis, which lay not in the Mediterranean or between America and Africa as most historians believe, but under the North Sea in place archaeologists now call Doggerland. Robert John Langdon shows in his new book that two stones within the Stonehenge complex have been identified by geologists as 'special', because they are of a particular stone (Mica Sandstone) unlike all the other large sandstones on the site. Moreover, the stones are in a direct alignment to Doggerland/Atlantis, which is now known to have been inhabited some 10,000 years ago by an unknown civilisation whose tools have been found by oyster dredgers scraping the shallow bottom of the North Sea for the last one hundred years. Finally, the book also proves that the Atlanteans built Stonehenge as a monument to their lost island and dead (hence the term 'slaughter stone' we still use today), which was not a stone circle facing the Summer Solstice as portrayed by the Druids today. But as a 'crescent moon' facing the opposite direction and the midwinter sunset, as our ancient beliefs have always associated stone, the moon and night-time with the afterlife.  TSE also looks at other sites such as Avebury, Durrington Walls (Woodhenge) and Old Sarum and discovers how the Post Glacial Flooding has affected these prehistoric ancient megalithic sites through raised groundwater levels.

Posted by Bob at 2:24:00 pm
Email ThisBlogThis!Share to TwitterShare to FacebookShare to Pinterest