BBC NEWS: Stonehenge may be mentioned in 8th Century poem

Dr Graham Davis has found an old Anglo-Saxon poem about Stonehenge - quite remarkably it not only supports my hypothesis but tells us a little bit more about the temperature of the waters around Stonehenge. 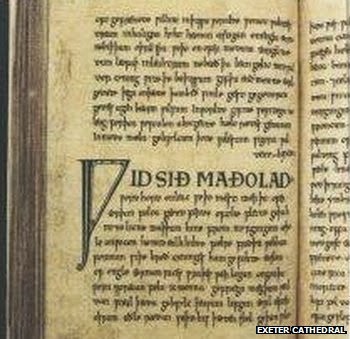 Wondrous is this foundation – the fates have broken
and shattered this city; the work of giants crumbles.
The roofs are ruined, the towers toppled,
frost in the mortar has broken the gate,
torn and worn and shorn by the storm,
eaten through with age. The earth’s grasp
holds the builders, rotten, forgotten,
the hard grip of the ground, until a hundred
generations of men are gone. This wall, rust-stained
and covered with moss, has seen one kingdom after another, 10
stood in the storm, steep and tall, then tumbled.
The foundation remains, felled by the weather,
it fell…..

…… a crust of mud surrounded …

….. put together a swift
and subtle system of rings; one of great wisdom
wondrously bound the braces together with wires.

Bright were the buildings, with many bath-houses,
high noble gables and a great noise of armies,
many a meadhall filled with men’s joys,
until mighty fate made an end to all that.

The slain fell on all sides, plague-days came,
and death destroyed all the brave swordsmen;
the seats of their idols became empty wasteland,
the city crumbled, its re-builders collapsed
beside their shrines. So now these courts are empty,
and the rich vaults of the vermilion roofs
shed their tiles. The ruins toppled to the ground, 30
broken into rubble, where once many a man
glad-minded, gold-bright, bedecked in splendor,
proud, full of wine, shone in his war-gear,
gazed on treasure, on silver, on sparkling gems,
on wealth, on possessions, on the precious stone,
on this bright capital of a broad kingdom.

Stone buildings stood, the wide-flowing stream
threw off its heat; a wall held it all
in its bright bosom where the baths were,
hot in its core, a great convenience.
They let them gush forth …..
the hot streams over the great stones,
under…
until the circular pool …. hot…
…..where the baths were.
Then….
….. that is a noble thing,
how …. the city ….


Sadly this all that survives with many line lost or incoherent

But does it gives us clues to the original use of Stonehenge and who built it?

"Wondrous is this foundation – the fates have broken
and shattered this city; the work of giants crumbles."


No one doubts the wondrous stone foundations of this site - yet built by giants (remember Stukeley told us that the original name of Stonehenge was the 'Giants Dance' )- is this a reference to the Cro-Magnons from Doggerland as portrayed in my trilogy?

"until a hundred generations of men are gone" - that's two and a half thousand years since the poem was written in 1000AD, even then they knew it pre-dated the Roman by at least 1500 years.

"Stone buildings stood, the wide-flowing stream
threw off its heat; a wall held it all
in its bright bosom where the baths were,
hot in its core, a great convenience."

Is this a reference to Stonehenge Bottom?  we know it was once a river which Darvill and Wainright have now confirmed my hypothesis - but was it hot?  We know that springs that still exist in Vespasian Camp just over the hill is warm so is there a hot spring in the district which Stonehenge Bottom would have been connect too? It makes good sense as we have proven that the Ditch around Stonehenge was cut as individual bathing pits.

Sadly the last part of the poem would have finally sealed the debate but all we have is:

"They let them gush forth …..
the hot streams over the great stones,
under…
until the circular pool …. hot…
…..where the baths were. "

As 'The Stonehenge Enigma' has shown the ditch at Stonehenge was a circular moat built from 'individual bathing pits', which design is unque in Britain - what we did not know until now is that they were filed with hot steamy water - Britains first spa to be used with the Bluestones from wales for as, the British poet, Layamon wrote of the properties of Stonehenge in a poem in 1215 AD, England:

Posted by Bob at 1:13:00 pm
Email ThisBlogThis!Share to TwitterShare to FacebookShare to Pinterest