13 Essays from my trilogy 'Prehistoric Britain' showing that our history  - just doesn't make sense at present!!

Here is the Introduction - the web site with more information can be found at:

Introduction
Are you a Historic Mushroom?

The word ‘Mushroom’ is rarely used in historical connections.  However, most of our history books are full of errors and incorrect assumptions.  If you have never heard of this term before it is (in the kindest terms) used to describe a person or persons keep in the dark and feed with …………….. manure!

So is our history a ‘cock-up’ or is it a ‘conspiracy’?

George Orwell's Nineteen Eighty-Four is a fictional account of the manipulation of the historical record for nationalist aims and manipulation of power. In the book, the creation of a "national story" by way of management of the historical record is at the heart of the debate about history as propaganda. To some degree, all nations are active in the promotion of such "state stories," with ethnicity, nationalism, gender, power, heroic figures, class considerations and important national events and trends all clashing and competing within the narrative.

Such cleaver manipulation is almost impossible to identify if you have been indoctrinated into these ‘lies’ as you have no benchmark to judge them against.  However, within those manipulations there will be facts that just ‘don’t make sense’!  I have highlighted some of these facts in this book to illustrate that some of our history is only ‘nonsense’, which could be due to ‘sleight of hand’ or simple due to the ‘simplistic linear way ‘we view history itself.

Homo sapiens are the only creatures capable of abstract thought and a ‘perception’ of time, creating a manipulation of thought concerning the past, the future and the present.  An inquiry into the nature of history is based (in part) on a working understanding of time as a human experience.  Therefore, history (as understood by Western thought) tends to follow an assumption of this linear progression: "this happened, and consequently, that happened; and so that happened because this happened first." This is also known as the ‘cause and effect’ philosophy.

Yet most ancient cultures held a mythical conception of history and time that was NOT linear. They believed that history was cyclical with alternating Dark and Golden Ages. Plato called this the Great Year, and other Greeks called it an aeon or eon. Examples are the ancient doctrine of eternal return, which existed in Ancient Egypt, the Indian religions, or the Greek Pythagoreans' and the Stoics' conceptions.

In ‘The Works and Days’, Hesiod described the five ages of Man: the Gold Age, the Silver Age, the Bronze Age, the Heroic Age, and the Iron Age, each with their ebbs and flows of progression.  Other scholars suggest there were just four ages, corresponding to the four metals, and the Heroic age was a description of the Bronze Age.  The clearest illustration of this ‘ebb and flow’ of historical invention can be seen with the Roman Villa.  The use of a ‘hypoacoustic'’ created a house that had ‘under floor’ heating, which is much more efficient than fires or radiators - yet if this house was found without reference archaeologists using ‘linear’ logic would conclude that it must have been built in the 21st century as all previous houses lacked the superior design.

So if our linear history is fundamentally flawed, where are these problems and are there a more rational explanation for them?

Here are my top thirteen! 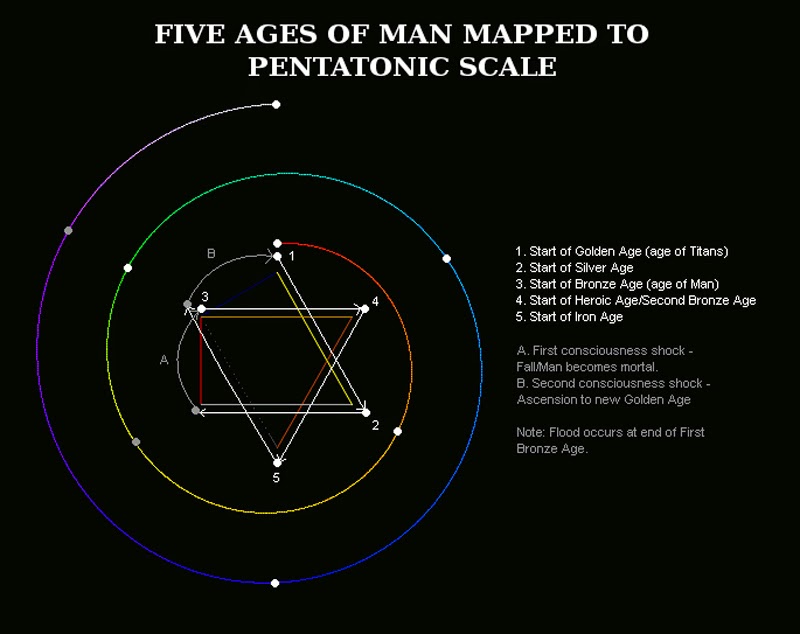 Posted by Bob at 12:20:00 pm
Email ThisBlogThis!Share to TwitterShare to FacebookShare to Pinterest