Documentary that accompanies this Section

12,000 years ago the last Ice Age finally melted, revealing the Britain we know today... OR DID IT?
Britain had been underneath two miles of ice and the surrounding seas had frozen solid. What was left was a huge icy mass of enormous weight, pushing down on this tiny island. This mass had compressed the earth so much that the land surface lay at least a half a mile below the sea bed as we know it today.
So what exactly happened after the great ice age melt?
This huge mass of watery ice that covered Britain raised the groundwater tables and left the land totally saturated. In fact, the volume of water was so great that it eventually created the English Channel and the North & Irish Seas. Very slowly, the land then started to rebound, so slowly in fact that even now, parts of Britain are still rising about one cm per year. This melting ice combined with the lowering of the land levels created not the single island called Britain we know today, but a series of smaller islands and waterways - totally unrecognisable to the landscape that is so familiar to us now. 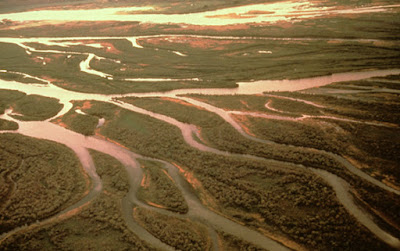 Moreover, the land became a sub-tropical forest as the warmer climate that first melted the polar ice caps encouraged the growth of abundant foliage. This would very probably have caused the islands to experience what we would consider today to be monsoon seasons. Which in turn then kept groundwater tables abnormally high for another 4,000 years? The foliage, groundwater and warm climate would have left the islands resembling more like the Amazonian rain forest, rather than the grassy hills of Britain we see today.
The only way our Mesolithic ancestors of Britain could have had to adjust to this new environment would have been to develop and use their boat and seamanship skills. Consequently, adapting to living and trade by these shorelines travelling via the vast waterways and lakes rather than through the forests, which would have been riddled with dangers such as brown bears, packs of wolfs and wild boar all roaming freely. Therefore, the shorelines became critical – our Mesolithic ancestors would have lived, worked and gathered by these ‘super-waterways’ and would have created social monuments and beacons on there beaches and peninsulas.

My hypothesis proposes that our greatest prehistoric monuments, such as Stonehenge, were built on these watery peninsulas. I also propose that the ditches surrounding henges were NOT dry ditches, as archaeologists currently believe, but were, in fact, constructed to be watery moats and canals, which turned these sites into very special islands. The most astonishing aspect of this hypothesis is that even today, thousands of years after the groundwater have subsided, we can re-visit these sites and identify the ports and channels of this bygone age and by using the landscape, we can date, more accurately than ever before, when the sites were initially constructed.
Another key component of my hypothesis is the discovery of navigational signposts, built within the landscape, on the banks of these waterways. Traditionally, archaeologists have believed that these had religious or ceremonial use, whereas my evidence shows that they had a more functional engineering purpose, helping our ancestors to navigate around these islands.
In fact, the book will show for the first time, that these signposts guided our ancestors when they transported enormous stones from the Preseli Mountains in Wales to the site at Stonehenge – by boat. These very stones were used to build the first phase this magnificent monument. Even more importantly, I can show the exact location of where these vast stones were unloaded from the boats and how this precious cargo and the mechanism used to lifted onto shore.
This discovery of this landing site has led us to accurately date for the first time the original construction date of Stonehenge - 7500BC to 8000BC. This is 5,000 years earlier than current archaeological estimations, making Stonehenge probably the oldest Stone Monument in the world. 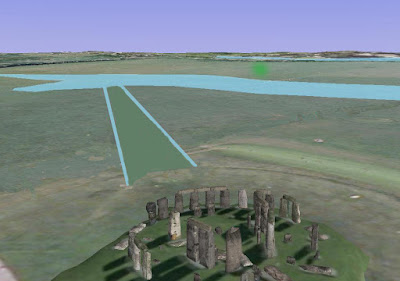